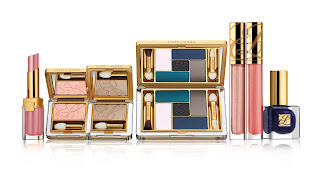 Hold on to your hats people, for I have fallen in love with an eyeshadow.  And it’s BLUE …

I was saying in one of my rambles on Zuneta recently that I much prefer the autumn/winter collections from the major cosmetic houses than the summer ones, and this a/w collection – the first widely available one from new Lauder creative director Tom Pecheux – is a beauty.  I don’t mind admitting that Lauder are – for me – doing some of the most interesting collections of the major beauty houses at the moment, Michael Kors was a total winner, and Bronze Goddess is probably my most favourite of all the summer collections I’ve seen.

I was invited recently to take a look at the new Pure Colours collection which is shortly to be re-launched in new packaging complete with 24 new eyeshadow shades and 24 new lipglosses.  The new formulation is great, long-lasting shadows and some lovely glosses (though I do wish they had a brush instead of a rather stiff and hard to use does-foot applicator), but it was the capsule limited edition Blue Dahlia collection (above) that caught my eye …

Here’s the palette itself: 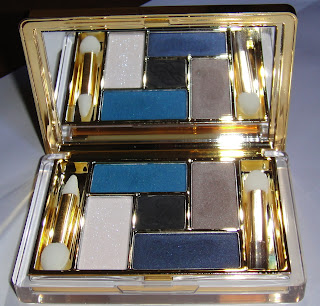 There’s a teal, taupe, smoky blue, a white with an iridescent teal shimmer, and a black for defining.  Take a look at a close up of that white: 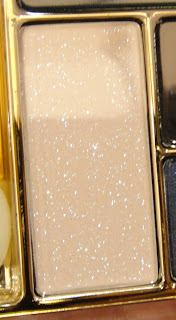 It’s gorgeous.  It swatches quite sheerly, but with a teal-ish glimmer, it’s very good mixed with the other shades in the palette, or patted over the top for a hint of sparkle.

I think the palette – despite my allergy to blues – is really very versatile, and I’ve created a couple of looks from it already.  Ha, Ha! Created looks – I hate that phrase, I’m about as creative as the average doorknob – what I actually mean is that I’ve done my makeup in a couple of (slightly) different ways with it already:

First off, a smoky eyed look: 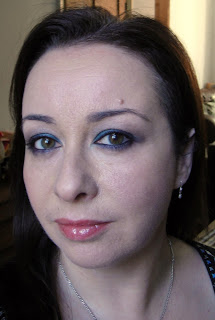 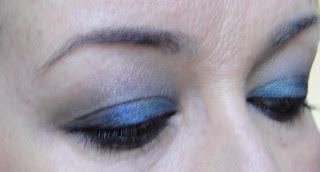 I didn’t use any base with these shadows, I wanted to see how they lasted (something I always do the first time I wear new shadows), and this is how they looked after ten hours wear:

Yes, the colour has faded somewhat, but the creasing is minimal, and it’s still quite wearable.

For a simpler look (I can’t, in all honesty, usually be bothered using more than two shades of eyeshadow on a daily basis), I used the taupe all over the mobile lid into the crease, then blended some of the teal into the crease and the outer eyelid: 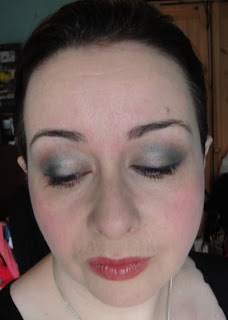 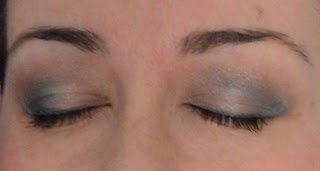 I’ve also been using the teal for tightlining, alongside the taupe as a neutral shade, but I forgot to take photos of that one …

The new pure colour shades will be available from July, and the limited edition Blue Dahlia collections (there’s a lavender/lilac version too, which I think I may have to splash out on) will debut in House of Fraser at the same time.  Will you be indulging?  What’s your opinion on blue eyeshadow?

The Fine Print: Palette was provided as part of a PR event, opinions are – as usual – as credible as you think opinions on PR-provided products possibly can be.  However, I’ve never had a good word to say about about any blue cosmetic ever, so he fact that I’ve used this every day since it arrived should speak volumes. That, or I’ve suddenly gone colourblind/mad/senile.