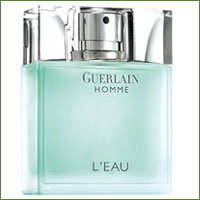 Back again, with a new scent that GetLippie and I are currently arguing about….

Guerlain Homme’s L’eau comes in a chunky translucent bottle that looks somewhat ominous, on first viewing. It’s big, angular, and has a GINORMOUS spray nozzle that just dares you to press it.

Once you get over that, however, the scent itself is actually quite light. It’s ever-so-slightly lemony, but there are so many other undertones in there that are only really noticeable upon repeated sniffing. Yes, I applied this to my wrist and sniffed it lots – so by the time you read this I am likely somewhat high on the fumes and have started talking to trees, but it’ll be hard to tell the difference from normal, so I wouldn’t worry too much about it…

Anyway…moving on. It’s not a spectacularly uber-masculine scent, it’s quite complex, preferring to sneak up on you rather than hit you over the head with how powerful it is. Think ninja rather than boxer, if you like? I would say this is also a scent where less is most definitely more…overapplying this, whilst it wouldn’t necessarily be unpleasant to those around you, could get a touch cloying. With that in mind, I’d wear this possibly once, twice a week at most – it’s something I’d prefer for an actual “event” rather than for everyday grind, where it’s less likely to be actually appreciated.

It lasts really well, too – I’ve still been sniffing it a good 7 hours after first applied, and the subtle changes throughout the day still make it quite effective and interesting.

So, the argument myself and GetLippie are having….is whether I should keep the bottle or she should. It’s a scent that lends itself well to women too, I think, so we could be having this argument for some time….

Redolent of limes, mint and hints of rhubarb, I love this. It reminds me a great deal of Guerlain’s Herba Fresca – one of my all-time favourite summer scents – but Guerlain Homme L’eau is a less green, more citrussy version, and has a slightly longer lasting effect on the skin. It’s cooling and fresh and it’s MINE.  I will admit that it smells good on MrL – it’s a slightly woodier scent on his skin – but it does work astonishingly well for either gender. I’m keeping it.So ner.

The Fine Print: We were sent a bottle of this to review several months ago and we’ve been fighting over it ever since.  Currently the bottle resides with Get Lippie in London and MrLippie has weekend access. Sometimes.