Guest Post: Cosmetic sell by dates and other nonsense.

Today’s post comes from the lovely Modesty Brown, I adore her blog, and she deserves to be so much better known, so please, go show her some love!

‘We wouldn’t hesitate to chuck out mouldy or bacteria-ridden food – and the same standards should apply to lotions we put on our skin.’

A few months ago I came across this article in the Mail Online. I have come across recommendations for discarding cosmetics before, but this particular article for some reason really got on my nerves. I suspect it was the spectacularly short shelf-lives prescribed for many of the products mentioned. As well as the rather alarmist slant (what was I expecting, it is the Daily Mail).

This is probably a good point to explain that I am actually a science nerd, specifically a skin microbiologist. I know quite a lot about the bacteria that live on your face (and have had a reasonable amount of experience with pharmaceutical companies). So, naturally I wanted to know if these recommendations were based on sound research or just a load of old flannel!

The bacteria living on your skin are there all the time, they don’t cause infection on your skin ordinarily so I don’t entirely understand the implication that bacteria will ‘breed’ in your make up and cause horrible infections like Impetigo. Unless of course you have been sharing your make up with someone that has open blisters? No, I thought not. Also, I’m not convinced that powdered make up like blusher and eyeshadows would make particularly good growth environments for bacteria.

With items such as mascara or lipgloss I agree there are good reasons to be cautious. Both mascara and lipgloss provide a good growth environment, it is moist, dark and pushing the wand/applicator back in drives air in to the tube.  Though having said all that make up does contain preservatives to prevent growth. With my background I was rather intrigued about what research had been done to investigate microbial contamination of make up. I also wondered if there was anything out there to explain the time frames for expiry.

Interestingly, I managed to find some research into contamination of mascara. In the study women were given a mascara to use daily for 3 months. Two different brands were tested, Avon and Maybelline. At the end of the study the mascara wands were tested for microbial contamination. Although their conclusions were that mascara should be discarded after 3 months, I wouldn’t necessarily agree with this based on their results. 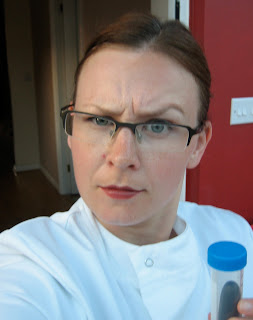 Growth was discovered in 12% of the mascara’s but the numbers of bacteria were very small. I won’t bore you with exact figures but from personal experience I can assure you the level of contamination was very low. Also, of the bacteria they isolated, none of the species would cause an eye infection unless there was a scratch on the eye. They managed to grow bacteria from the unused control tubes as well, so some of the bacteria were already in the mascara tubes. Which suggests that contamination occurred during manufacture. Although the research made for interesting reading, for me, it wasn’t a terribly convincing argument that mascara is easily contaminated or poses a serious health risk. I was however horrified by this particular gem from the paper ‘Some will add water, and even saliva, to make their makeup last longer’. Who on Earth spits in their mascara to make it last longer?

I failed to find any research testing other kinds of make up for bacterial contamination. I found lots of articles stating eyeshadows, lipsticks etc., can become contaminated but no research or statistics to back it up. This leads me to think that these sorts of tests are being done by the cosmetics companies and I know they are rarely able (or willing) to share their results! I know that it is also the companies that set their own Period After Opening (PAO) dates, so of course the cynic in me thinks that the dates might well be a bit of a marketing ploy.

Now, I’m not going to advocate you ignore all the guidelines but I would like to suggest that you follow your own instincts before throwing away the contents of your make up bag! As long as you are not sharing your make up, keep your brushes clean and store your cosmetics in a cool, dry place, you can keep it safely for much longer than the expiry guides suggest. My other key advice is to trust your nose! If a product changes texture or starts to smell, bin it. Don’t ask me to describe the smell folks, just believe me when I say you’ll know!

21 thoughts on “Guest Post: Cosmetic sell by dates and other nonsense.”