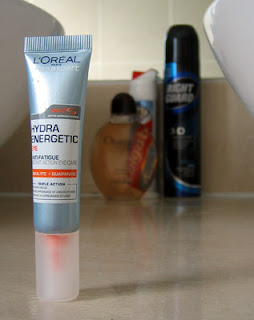 Here are the items on the shelf in my bathroom: toothpaste, antiperspirant, aftershave. There’s also a tube of Hydra Energetic, Anti-Fatigue, Instant Action Eye Care. My wife bought it for me. According to the side of the tube I’m supposed to apply it morning and evening, gently patting it into the “eye area”, and smoothing outwards from the corner of the eye to the temple. I’ve gone through this process only once. I followed the instructions to the letter, then stared into the mirror in anticipation.

It had made no visible difference whatsoever! I wondered briefly whether I’d misunderstood the instructions; whether their definition of “eye area” and mine were the same. And then I put it back on the shelf, and never gave it another thought until today. When it comes to understanding makeup, clearly I’m missing some kind of gene.

My wife loved makeup. That same shelf in the bathroom I now use for my four items was merely an over-flow area for all the jars, cans, bottles and sprays which occupied every available surface. Kate accumulated cosmetics faster than she could possibly use them. Much of it via the internet. Much of it from abroad. She had products that were allegedly infused with gold, and others that purported to have liquid oxygen in them.

When Kate died I wasn’t the only one who suffered a loss. Shares in Boots the Chemist dropped several points. The whole cosmetic industry entered a slump that they’ve wrongly attributed to early signs of the recession. In short, she should be the one writing this blog entry.

But I do remember this: Early on in our marriage Kate hired a Makeup Artist and Image Consultant to help her “discover a new look”. Whilst I tapped away in my office I could hear the exasperated sounds of my wife arguing with the woman who’d agreed to take on a challenge from which there could be no victory. And then it happened:
“Well let’s see what Peter thinks,” said Kate. And moments later she was standing in the door-way to my office, looking a little like the clown doll from the old BBC television test card. “Well?” She asked. I considered my reply carefully. By now the Image Consultant lady was standing behind my wife, desperately hoping that I’d come to her defence. But she was going to be disappointed.
“I’m not sure it’s really you,” I said.
“What don’t you like about it?” demanded Kate.
“It’s just.. it’s not.. I kind of prefer it when you don’t wear makeup it.” It was true.
“And that’s my point,” said Kate turning to the lady behind her, “Because Peter doesn’t even realise that he’s never seen me without makeup!”

At the time I was shocked. I felt foolish, and a little hurt. Like I was somehow one of those husbands who wouldn’t notice if my wife had had her hair done, or shaved it off, or was wearing a bin liner, or was actually there at all. But now I realise that’s not what she meant. Makeup, so it seems, isn’t supposed to be noticed. At least not all the time. Sometimes it’s there just to make sure your loved ones don’t miss the natural features you already have.

Which makes me wonder whether I should have another look at that barely used tube of Hydra Energetic, Anti-Fatigue, Instant Action Eye Care.