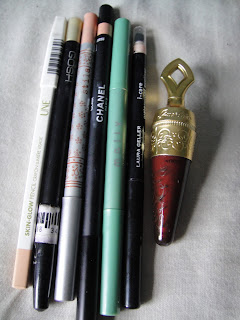 Up until a couple of months ago, I didn’t own a single “nude” eyeliner.  Having been tortured throughout the ’80s by white eyeliner that was supposed to make you look more “awake” (but in reality just kind of made people look like they had been attacking their eyes with Tipp-Ex), I didn’t really think there was anything you could realisitically use these pencils for.  I’d been reading a lot of love on blogs for Stila’s Topaz, and when it came up on ModestyBrown‘s blog sale I bought it.

And now I own seven. <sigh> I’m not sure if it’s a problem or not, to be honest.  I now have Une’s Skin Glow, GOSH Go Bananas, Stila Topaz, Chanel Clair, Mally’s double ended pencil, Laura Geller’s I-Care pencil in Bone, and Guerlain’s Secret Glow.

Did someone mention swatches?  Here you go: 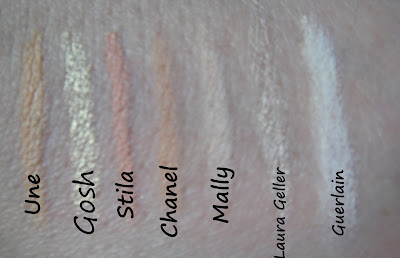 GOSH Go Bananas: This is actually a shimmering yellow.  Not actually that great as a nude liner, it’s a little too yellow for that.  That said, this lasts astonishingly well, and won’t actually disappear until you use a remover to take it off.  Great for highlighting around the tearduct rather than using on the waterline, if you ask me.

Stila Topaz:  Although this was the one that started off my collection, I have to say that it’s very much not my favourite.  In fact, it’s probably the worst liner on this list.  Why?  Well, it’s very soft and creamy.  FAR too soft and creamy, in fact.  It’s exceptionally easy to overapply (making it look like, well, ta bit like: Your eyes are leaking!! Leaking onto your face!!!  which isn’t a great look outside of Halloween), and it can get onto your eyelashes a bit which just looks wrong, really.  Also, it’s a little on the peach side, which means it’s not a great match for most people’s skin tone.

Chanel Clair:  Probably the hardest pencil on this list, it’s very subtle, and all the better for it.  The firmness means you don’t get the “ooziness” of the Stila, and the colour is very good too.

Mally: The second palest on this list, this gives a very similar effect to a while pencil.  If you’re very, very pale, this might be a great choice for you.  It’s a double ended pencil though, so means you don’t get very much in there.  I’ll be talking about the other half of this pencil next week …

Laura Geller: Another hard pencil, this time in a shimmering ivory shade.  Possibly the prettiest pencil in the collection (and has a great built-in sharpener), alas, I can’t get this one to show up on my waterline at all.  Such a shame!

Guerlain Secret Glow: A shimmering vanilla shade, this is glorious (and works well as a browbone highlighter too), being a powder, it’s easy to overapply, and make yourself look a little odd, but I do love this one quite unreasonably.

Overall, the ones I’d buy again (and I did buy most of these myself) would be the Chanel and the Une.  What do you think?