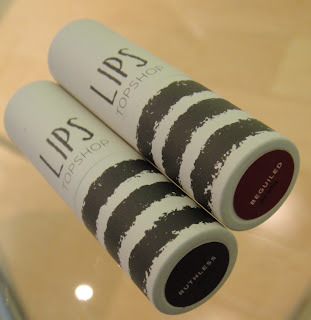 I’m a makeup snob.  I know it, and I rarely make any apologies for it!  However, I do like a little look around makeup from the high street every now and again.  Now, I am old enough to remember TopShop’s original range of makeup (which, if memory serves was based around rip-offs homages of Nars Multiples, I still have both the silver and the gold one around somewhere, which, as they must be almost 15 years old now is rather disgusting now I come to think of it), and I was under the impression that Top Shop’s makeup range wasn’t for me.  Well, it turns out I was wrong.  And right, but more about that later …

I was unexpectedly sent two of the latest lipsticks from the range, and I’ve been rather pleasantly surprised by the quality.  Ruthless and Beguiled are bang on the “goth lips” trend for this winter, Ruthless being a deep purple, and beguiled being a red: 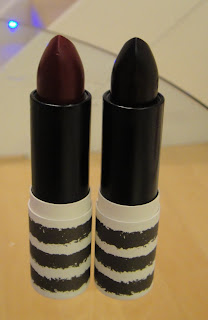 Swatched, here’s how they look: 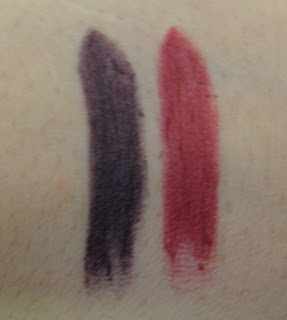 As you can see Beguiled swatches rather lighter than you’d expect from the bullet shot, and Ruthless isn’t actually black …

Love Beguiled, and I’ve worn it a lot since it appeared.  I find the texture velvety and moisturising, and it’s non-staining too.

Ruthless won’t ever be worn outside of the house, unless I want to give MrLippie a shock, he nearly had a heart attack when he saw me in this!  All I can say is that … well, it didn’t look as bad as I anticipated, but … I don’t think I’ll be wearing it for work any time soon.

All in all a definite two thumbs up for the formula – and I like the quirky packaging, though for some reason I was under the impression that these were originally presented in cardboard tubes, mine are in matte metal tubes – but, as I suspect that the only things in Top Shop that would fit me are the lipsticks, I don’t think I’ll be picking any more up, unless you can buy them online!

Lipsticks are £8 each and available from Top Shop stores now.