Floamia is my latest guest poster, who’s come out of her blogging retirement to take a thorough and much appreciated look at a range of Bourjois mascaras.  I’m very honoured, thank you Floamia!

I’d like to start off this post just saying thank-you for the opportunity to write for this blog, which I’ve been a fan of for quite a while. Much appreciated! 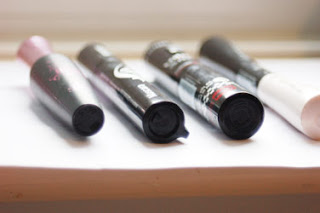 So today I thought I’d look at four mascaras from my collection, all from Bourjois! There are a few high-end ‘cult’ mascaras, and I feel like the high-street brands can often become abandoned and forgotten, so I’m here drawing attention to four from just one brand, and doing a compare-and-contrast for all of you. And I apologise in advance for staring at you in all of the swatches. Sorry ‘bout that. 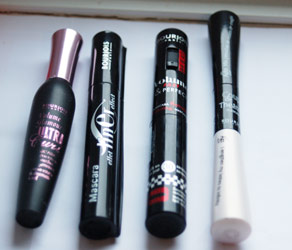 Volume Glamour Ultra Curl – £7.99
The first in our line-up boasts of the ability to double the volume of your lashes. Without anything on them, my eyelashes are quite fair and fluffy and nothing-y, the remnants of being a fair-haired child, which now look somewhat out of place with my now dark hair!
This mascara is one of the three I’m reviewing today that can stand up on its own, which I quite like. It’s rounded, as most mascara packaging is, so it could roll away if left horizontal, so it’s nice that it can support its own weight as it were. Nice flat base, always a plus! I’ve owned this mascara for a while now, so the shiny pink lettering and lid has started to fade and chip a bit, which is somewhat less glamorous a “Volume Glamour” mascara ought to be, if I do say so myself, but that is truly just a bit of pedantry on my part. 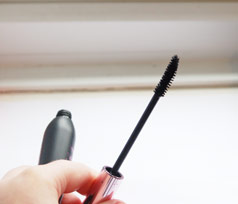 The spoolie in the product shot on the website actually looks a lot more curved than it is in person. Again, I think this may be in part due to the fact that I’ve owned it for a while, and its bouncy resilience has faded somewhat with me repeatedly taking it out of the tube. If you’re someone who regularly replaces your mascara (and it’s debatable whether or not you actually should), this won’t be an issue.

[Top, bare lashes, Bottom, one coat of Volume Glamour Extra Curl mascara]
In comparison to my bare lashes, the effects of this mascara look quite striking. My lashes are much, much more visible, and seem slightly more curled open, leading to a more ‘awake’ looking eye, I think. This mascara does tend to flake a bit, when worn all day. I’ve found that if I put this on in the morning, by about four or five o’ clock I will have little sooty bits of mascara debris littered on my cheeks.

Liner Effect – £8.99
Our second mascara to be reviewed today is, I know, a firm favourite of a few bloggers I know. I hadn’t actually seen it in my nearest Boots at the time when I was reading such rave reviews of it, but when it suddenly appeared I felt obliged to snap one up.
This is another that stands up independently, but even if it didn’t, it has a silver ridge matching the line in the logo of the name of the mascara (of the brand of the Bourjois of the Paris…) which would stop it rolling away while lying flat, too. 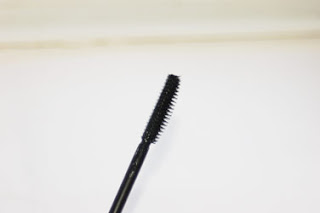 The spoolie has really short bristles on one side, and longer ones on the other. I tend to use the shorter side to get right at the roots, and then sort of top up with the longer side.

[Bare lashes on the top, one coat of Liner Effect on the bottom]

I‘m less impressed by the promises here. For something promising the effect of wearing eyeliner, I’d expect much thicker looking lashes. They still look rather fluffy and sparse, here. The wear is good, though. No smudginess, or flakiness, and it seems fairly waterproof, without running it through a shower.

The gimmick-iest out of all of our line up, by far, and to be honest the gimmick is the reason I picked it up! I remember there being vibrating mascaras, but this was the first I’d seen of a rotating one, and while I had little hope, I was abundant with curiosity! 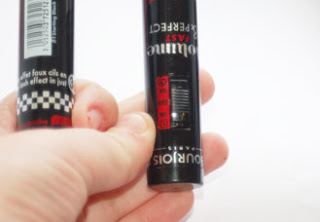 There’s a little switch on the handle of the mascara with options for clockwise, anti-clockwise and off. It wasn’t until I started playing around with it that I realised that I needed the different directions for my different eyes, and opposite directions on the lower lashes to those of the upper lashes. It’s quite clear if you’re using the ‘wrong’ direction, though, as it begins to move over your lashes and run them over, rather than fanning them open. And fanning them open is definitely what happens when you use this correctly. I can place this at the base of my eyelashes and I swear every lash is separated and coated evenly, and they look much thicker. I’ve even got out my italics a lot for this description; I’m terribly fond of it!

Alas, when it comes to wear, this one is a wee bitty bit smudgy, but I will forgive it its trespasses for its application. Would it be bad to say I actually find it slightly fun? It feels like a toy! But for my eyelashes!

Coup de Theatre – £10.49
I believe this came out round about the time of the 2-in-1 mascara craze, started by L’Oreal, if I recall correctly. Along with every other high-street brand, Bourjois came out with its own double-wanded creature, which, looking at the website, seems to have been updated in the form of a single-wanded version with the same formula. How I feel behind the times! 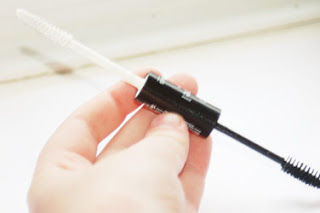 [Double-wandedness. Also, the fact that I have the hands of a child.]

The black end of the spoolie has a similar short-bristles-one-side/long-bristles-other-side thing going for it as the Liner Effect spoolie, but this one seems to be made out of the traditional bristles, rather than the nylon ones.
This is the only one out of our four mascaras that doesn’t stand upright, having a curved base, which thoroughly depressed be when I came to photographing them, as I wanted to stand them side by side. Boo.

[Bare lashes on the top, one coat each of the white end and the black end of Coup de Theatre at bottom]
With the white coat on alone, this mascara looks like it will easily be the most impressive. Lashes look much, much longer, and thicker. Were I in the habit of wearing white mascara, this would come up trumps. Easy.
Alas, I’m not in such a habit, and this mascara becomes much more disappointing once you apply the black coat. It feels like it snags a bit, on top of the white coat, and it takes a lot of careful work to avoid leaving uncovered white patches. This is also the only mascara out of the ones I’ve reviewed here that leaves dots from the wet mascara on my eyelids! And I had had such high hopes to start.

It is evident, then, that our winner is the gimmick-y rotating Volume Fast & Perfect mascara!
Disclosure: All of these products were bought with my own money

******
Get Lippie says: I’ve tried all of these too, and I have to say that the Volume Fast and Perfect is a glorious mascara, even when you accidentally have worn the batteries down by leaving it in your makeup bag with it running …