A journalist from one of you contacted me this week.  You said you wanted to interview me about my makeup collection (I’d responded to an RT on Twitter that I didn’t understand, and you emailed me to explain), and you invited me along to a photoshoot too. You said I was “perfect”.  I was the right age, had the right kind of collection, and you loved my blog so you really wanted me to take part.

So, in spite of it being a hellishly busy week – it’s month end, I’m an accountant, I’m training up a new member of staff, plus we’ve moved to a new office – I rearranged my day, and gave up the one lunch hour (actually 30 minutes) I’ve managed to grab in two weeks, in order to do a phone interview with your journalist. I didn’t get any lunch in the end. After that, I proceeded to rearrange my weekend plans to fit in your photoshoot.  I inconvenienced a few people, not least of all myself.  But it was okay!  I had a photoshoot in a national magazine to make my excuses about!  People grumbled, but they understood.

I agreed because your magazine was one I felt fit right with my blog.  I’m in your target audience, I have a “don’t tell me I can’t” attitude, I’m open-minded, optimistic (What?  I am!  Occasionally), and modern in my lifestyle choices. Heck, I’m so modern in my lifestyle choices that I write a blog.  On the internet.  Get me, being all crazy with that new-fangled technology shizzle!  Did I mention I’m down with “the kids”?  They love it when we get all crazy with their hippity-hop slang.  They really do.  Anyway, I’m digressing.  The point is that I get approached by newspapers and magazines quite regularly these days, and I say no to 95% of the offers that I’m made because they don’t feel right.  In this case, I thought we were a good match, and that you weren’t one of those magazines that take the mickey out of their readers.  I grew up reading my mum’s copies of you, and I thought I knew you.

Except, of course, I was wrong.  You’ve dropped me from your article, and I’m not allowed to be featured, or to go to that “lovely” photoshoot and it’s all because my “lifestyle choices” are a little “too” modern for a magazine.

You know why, don’t you?  It’s because I write a blog. And you “don’t want to publicise bloggers”.

The day after I gave up my time, and rearranged my week to fit in with your schedule (at very short notice), you rang and told me that you’ve had a “new editorial directive” and it’s about the aforementioned publicising of bloggers.  You said sorry, you were very polite, and seemingly a bit upset at the directive, but it was still a massive smack in the face for me.

You contacted me!  I didn’t email you, begging for publicity, then tell you to bog off after you’d made massive schedule changes at short notice, and sorted everything out, by cancelling on you, with less than 24 hours notice to boot.  No, you wooed me, courted me, made me drop everything for you, then dumped me, even though the thing you didn’t like about me at the end was the one thing that made you contact me in the first place!   You found me because I write a blog, and you wanted to feature me because you liked my blog.  But, because I write a blog, you can’t feature me, because you don’t want to give me publicity?

Did I even ask you to mention the blog?  I don’t think I did, actually.  You mentioned it a lot when you got in touch though, oh boy, didn’t you!

Magazines, there’s one really big thing that you always forget about bloggers, and that is that we are your readers too.  Our readers read magazines as well.  I love magazines so much I now write for one, part-time, admittedly, and it’s only been a couple of week, but still, it’s in print and I love it.  My mum will love it too, I don’t think she gets the internet, and she’s a massive fan of magazines – it’s where I got my love of them from. Indeed, from where I’m sitting, right here and now, I can see a pile of magazines six inches high.  I dread to think how many are under the bed. 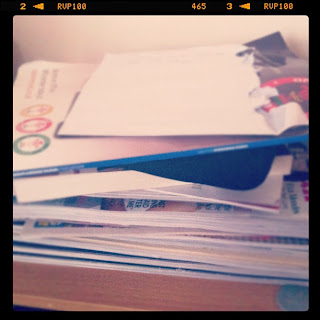 Now, most magazines are simply falling over themselves to court bloggers, and, whilst it’s refreshing to discover one that isn’t, let me ask you one thing: why did you bother?  I don’t need publicity, really.  Whilst it’s always nice to see my name in print, I already get far more attention than a short, fat, bad-tempered, kinda funny-lookin’ accountant with three jobs can handle, so I don’t really court it  (although, I have taken part in a feature for a national newspaper recently, which I suspect will come back to bite me on the bum at some point. More about this at a later date), and I’m actually too busy living my busy life, making my modern lifestyle choices, and being as “can do” as I can possibly be without being either Pollyanna or a massive walking cliche.

I’ve had a troubled relationship with magazines for a while now, ever since a (former) idol of mine wrote a blog post about how dreadful bloggers were (oh, the irony! Using a blog to slag off other people with blogs!), calling us hairy-armed blaggers and there was a cacophony of beauty editors literally falling over themselves to chime in with how much they agreed with the article, and patting the author on the back for “telling it like it is”.  There was an air of “they had it coming, those uppity bloggers, let’s give it to them”.  Nice. Ironically, I’ve worked for several national newspapers, which is far more media experience than some “journalists”.  Does it make me a better blogger?  Not really.

The author (and former idol, did I mention that?) then turned it back on the bloggers who had an issue, suggesting that the only bloggers who would have a problem with it were those self same “blaggers”.  Actually, very much not true, whilst there are undoubtedly bad bloggers around, suggesting that the only good bloggers around are those who have been journalists first is not only fallacious, it’s egregious.  Some of the best writers around don’t even want to be journalists, why should they be?

As a result of all this, I even considered giving up the blog.  These were people I respected and have looked up to for a long time, and if they can think that about their bloggers – of whom I am one by choice, as well as by inclination, and yes, I do consider myself a “blogger” rather than an “online writer” or whatever we’re supposed to call ourselves this week – well, what am I doing with my life?  It passed, but, every now and again, I have my doubts about why I do this.

I’m digressing (slightly) again.  It was a distasteful episode for a variety of reasons, and I lost a lot of respect both for the author of that article, and the beauty editors who cheered the author on.

It was distasteful because some of those beauty editors work for magazines which run those “best beauty blogger” award schemes, which usually involve the “winning” bloggers getting an opportunity to write for the magazine!  For free, of course.  But first, those self-same bloggers are “gently encouraged” to write articles about the awards begging their reader to go and vote, thereby giving the magazine tonnes of free publicity!  Oh, and linkbacks to the voting pages of the magazine, lets not forget those. Lots of nice SEO links for the magazines there, lots of nice (free) publicity for the magazines, lots of traffic to the magazine website from the bloggers readers and hey, at the end of it, guess what?  Free content for the magazines!  Again, nice. For the magazine.  The blogger never gets much out of it other than a byline on an article (online-only usually), but hey ho, it’s nice that the magazines do something for us, eh?

The magazine who wooed me and dumped me this week wasn’t one of those magazines, which is why I thought it would be good to work with them.  I was wrong, there’s just as much contempt for bloggers in the magazine-world as I thought there was last year.  They just hide it better.

Let’s get a couple of things straight.  Movies didn’t kill off the radio.  Television didn’t kill off cinema. The internet hasn’t killed off TV.  None of those things killed off books, and blogs won’t kill off magazines and newspapers.  Yes, some of those industries have had to adapt to survive, and none of them are really in their heyday any more.  Bloggers aren’t really going anywhere either, and barely any of us have any plans to “replace” magazines.  We’re doing something magazines either can’t or won’t.  There’s room for both.  And when the thing that replaces blogging as the next “big thing” comes along, us bloggers will have to adapt to survive too.  You’ll get your laughs in when that happens, national magazines, oh yes you will, just you wait.

In the meantime, I’ll be sending this national magazine an invoice for my time and inconvenience.  You betcha.  I won’t, however, be buying a copy of it ever again.  And I’m going to tell my mum on you. So there.