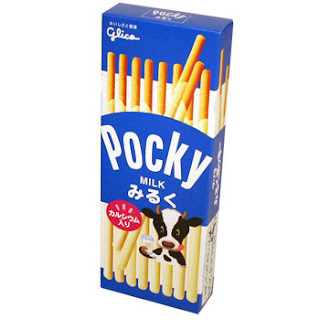 I love milk flavoured sweeties, I do.  I can get nostalgic for milk bottle gums at the merest snap of a haribo packet. I like milk in my skincare as well (goat milk, for preference, thank you), but I really like milk.  Do you know, on the vanishingly rare occasions I visit coffee shops, I drink hot milk?  Yes, I am THAT weird, plus it confuses the heck out of the baristas and that amuses me.  It always strikes me that a lot of the drinks in those places could only be improved by taking the coffee out of them, but I think I’m digressing …

Right, where was I?  Oh yes, Milk flavoured Pocky.  CyberCandy is one of my favourite places on earth, I’ve lost count of the number of hours I’ve spent filling shopping baskets then not buying anything on their online store, and I’ve spent more than my fair share of time in their offline stores as well, usually hassling the staff for salty licorice (what do you mean, euuuuwww? It’s delicious!) and chocolate coated pretzels.  And pretzel-filled M&Ms.  Basically anything a bit salty. With chocolate or licorice on it.

Hang on, Milk flavoured Pocky!  I was offered my run of the Camden CyberCandy store last week, and picked a packet of these to try.  Have you any idea of how difficult it is being given the run of a sweetshop when you’re on a diet?  I tell you, it’s very difficult.  But, hey, I weigh two stone less now than I did in June, and Pocky are only half a syn a stick on Slimming World, and they’re milk flavoured.  I may have mentioned that I like milk.

Pocky, if you don’t know, are a Japanese snack, they’re a long thin biscuit, which come 3/4 covered in a creamy topping, usually chocolate, but there are masses, and masses and masses of flavours.  Including milk.  They’re a bit like an anorexic Cadbury finger, and they’re extremely moreish.  I polished off my packet of Pocky in about two minutes, but I enjoyed them hugely.  I could have inhaled them all in about 45 seconds, but I’m on a diet and thought I’d spread them out (you get about 12 in a pack) a bit and really enjoy them.  You know, like you do.

So yeah, Pocky.  Go buy them from Cybercandy. They’re 99p, and it’ll be the best two minutes of your weekend.

The Fine Print: I didn’t pay for my Pocky.  I actually wanted a bar of Milka Happy Cow, but I was thwarted.  THWARTED! I’ll be bringing you more reviews from CyberCandy every once in a while.  I thought it was time I mixed things up a bit. You’re still not getting any outfits of the day though, I promise.

One thought on “Milk Pocky from CyberCandy”