I wasn’t that fussed about flowers for the wedding, to be honest, and I wasn’t even going to bother.  But, after three sets of parents (look, it’s complicated, okay?) asked what we were having, we realised that maybe flowers were a bigger deal than we’d realised and we did some investigating.

I knew all along that having a February wedding meant my options for real flowers would be limited, and that not getting married till later on the day would limit those options further (cut flowers start to die from the moment they are picked, and need careful handling to look their best if you’re not getting married early morning) so I was always at least vaguely interested in silk flowers. 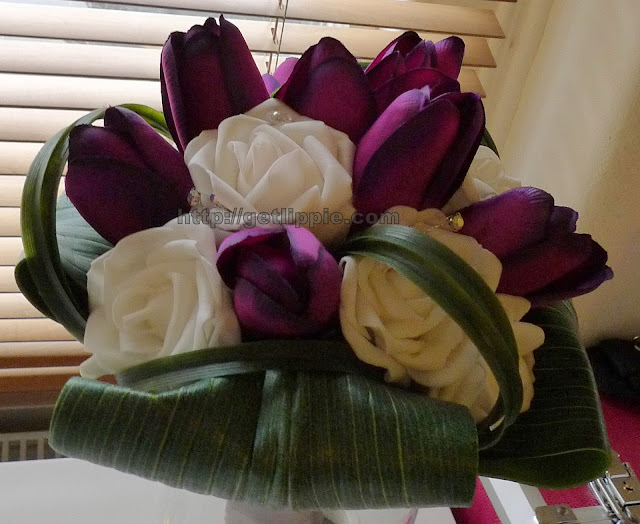 After doing a great deal of googling in the months running up to the ceremony, I discovered Silk Blooms,  who had by far the largest range of purple bouquets, and at extremely reasonable prices to boot.  I did some checking of their reviews, and they were unanimously positive, which gave me some peace of mind – especially as I was ordering the flowers rather late, all things considered!  Note to self: for next time, order flowers when there’s more than a month before the ceremony) 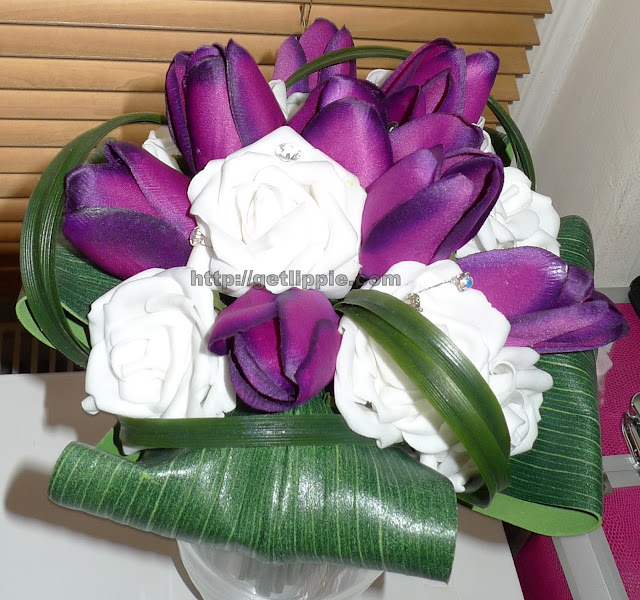 Anyway, the bouquet I decided on, the Lesley, is, perhaps, somewhat more traditional than I think I would have picked had I gone for a white dress – I was interested in a long “spray” of purple orchids originally, but I realised that the drama of it would have been lost against my magenta dress – I think the mix of white roses and purple tulips (I do love me a tulip) worked well with the colour of my dress: 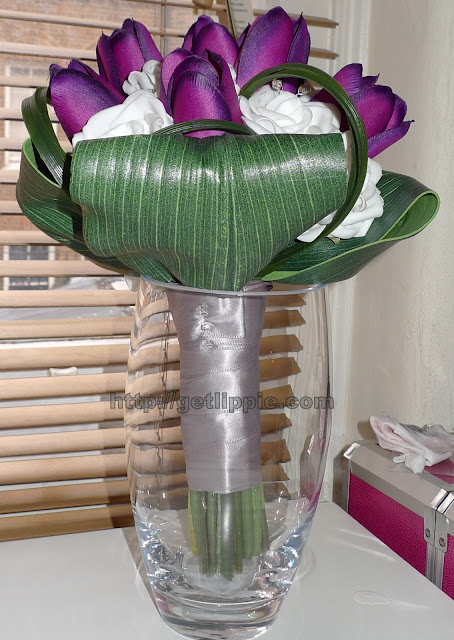 Overall, I can’t fault the service from Silk Blooms at all, they dealt with my rather vague instructions exceedingly well (the question “can I have silver ribbon please?” elicited a choice of no less than five different wrappings to choose from, completete with links, and suggestions) and they were also  extremely helpful when I realised a couple of days later that I needed more buttonholes too.  The flowers were despatched very quickly, and arrived in perfect condition – everybody loved them!  Mums in particular loved their matching corsages.  On the day they garnered lots of compliments from the guests, and quite a few people were stunned when they realised they weren’t “real”!

I love the fact that if I’d have needed the flowers in a different colour, Silk Blooms could custom-dye the flowers if I could tell them a Dulux colour shade that matched what I wanted, which is very handy if you need something a little different!  They also sent a little email (and not a form one, either) on the day of the wedding to wish us luck too, which I thought was a very lovely touch.

Best of all, I have a permanent keepsake of my day which looks as good now as it did then, and so do the wedding party who all had corsages, buttonholes and  bouquets of their own, in a matching design.  I currently keep my bouquet on my desk, and I’m planning to fill the vase with hundreds of aurora borealis crystals to make it even more of a feature.  Silk Blooms also do a selection of flowers for the home too, and we’re thinking of investing in a couple of arrangements to put around the place as they have some fabulous ones, both modern and traditional.

What do you think of silk flowers?  I know some people really hate the idea, but I think if they’re done well, no one need ever know!  I admit to being surprised at how much I liked my bouquet, and deeply surprised at how glad I am now to have even bothered with them, too. Thank you, Silk Blooms!

The Fine Print:  Purchases – Silk Blooms had no idea who I was, or if I was going to write about them (I genuinely wasn’t planning to, but so many people have asked about them) – their excellent customer service comes as standard.

This post: Wedding Flowers with Silk Blooms originated at: Get Lippie All rights reserved. If you are not reading this post at Get Lippie, then this content has been stolen by a scraper