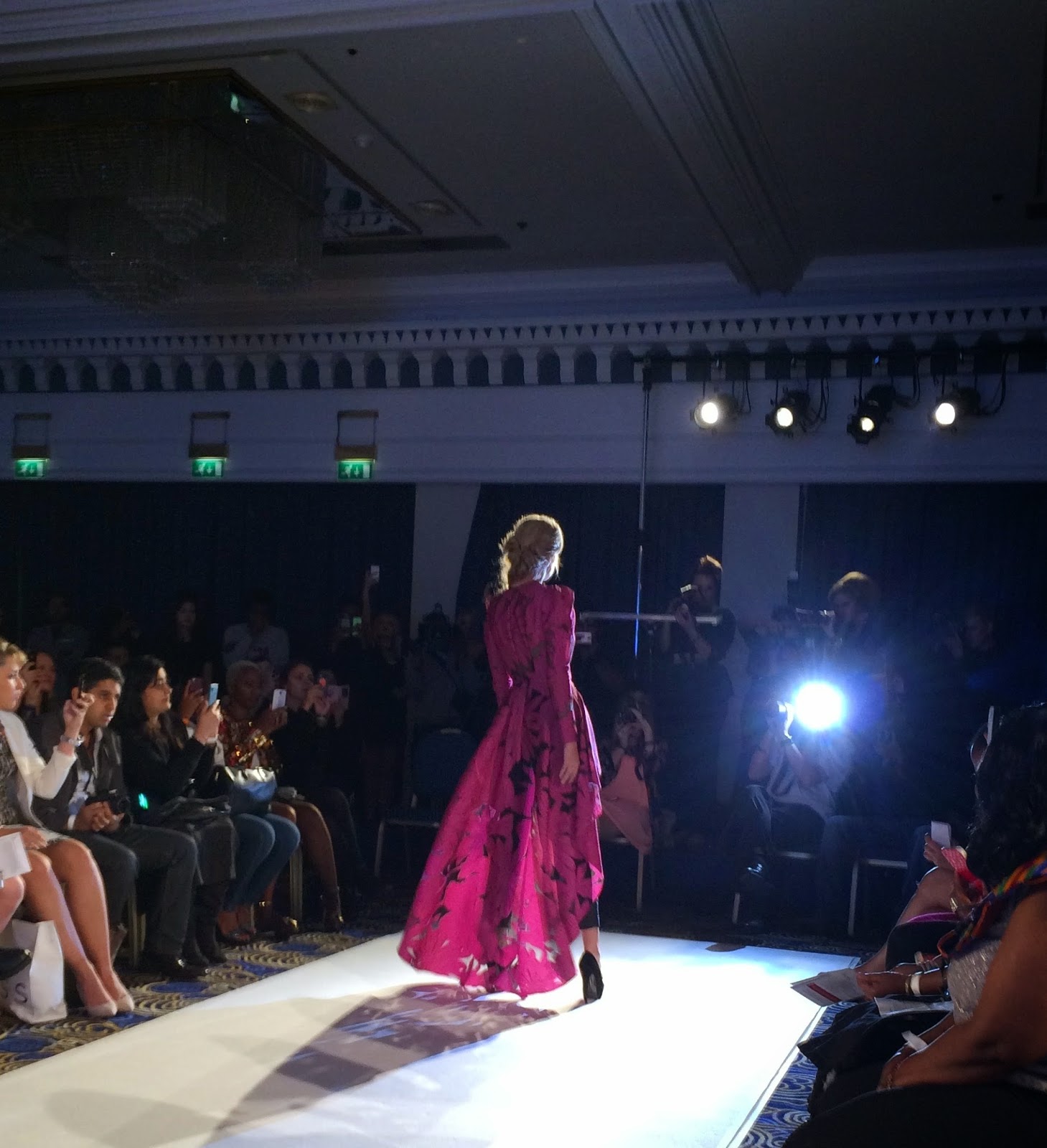 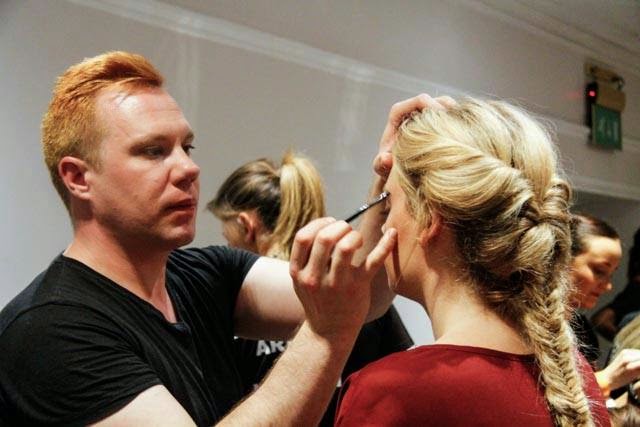 It’s been a
little while since I wrote anything for Get Lippie, and to get me
back in the writing saddle, and so I could atone for this appalling
neglect, our resident pro make-up artist Luke Stephens arranged a
ticket for me to attend the London Fashion Week Synergy event:
Emerging Trends. Luke was second in command to make-up supremo, Nicci
Jackson and the London Muse pro make-up team for Emerging Trends.
This is an annual European showcase of new designers and can be a
really important springboard into the industry for them. There was
certainly some interesting work in show, and I really enjoyed the
whole experience, especially getting a glimpse of what happens
backstage. 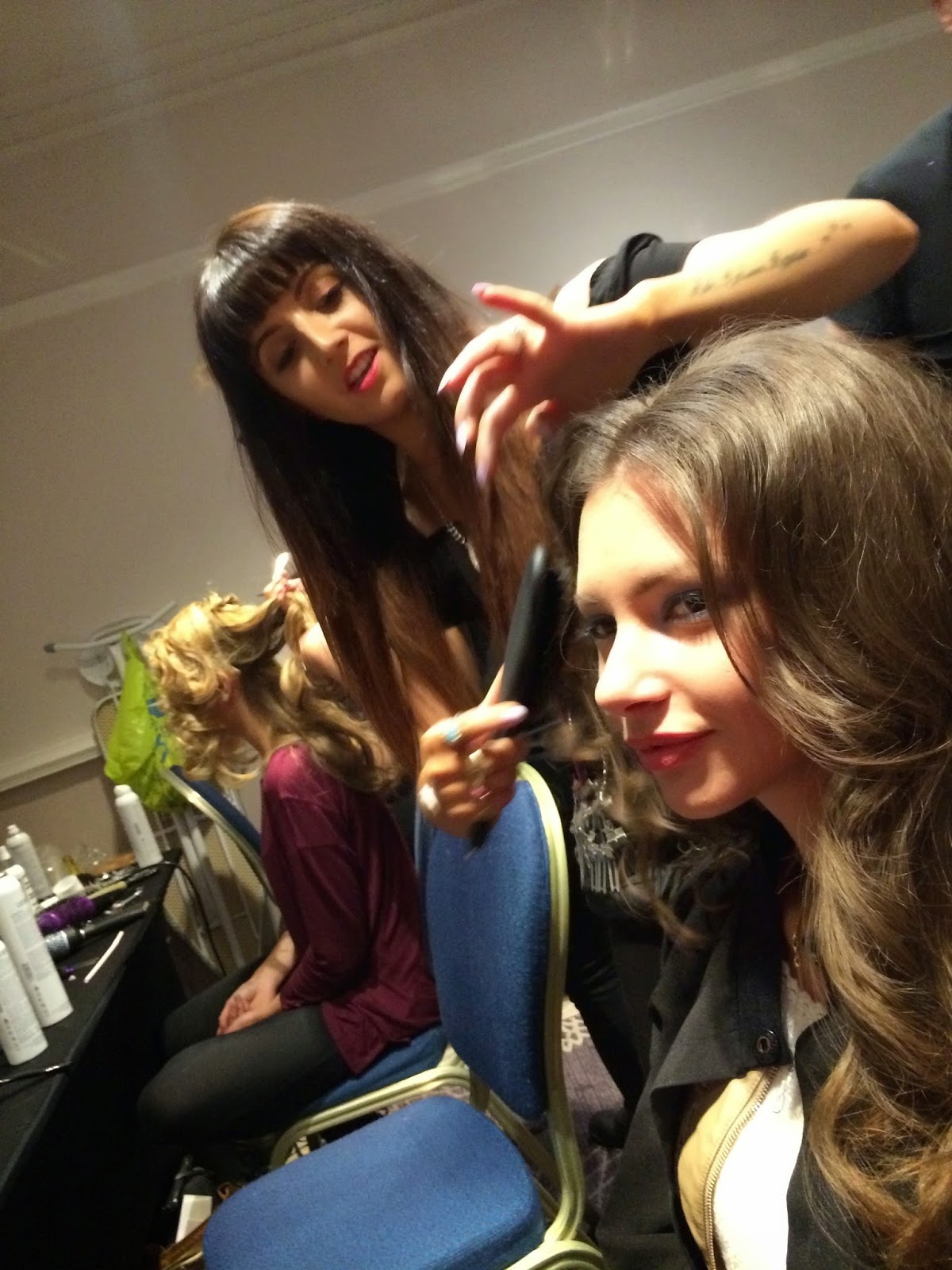 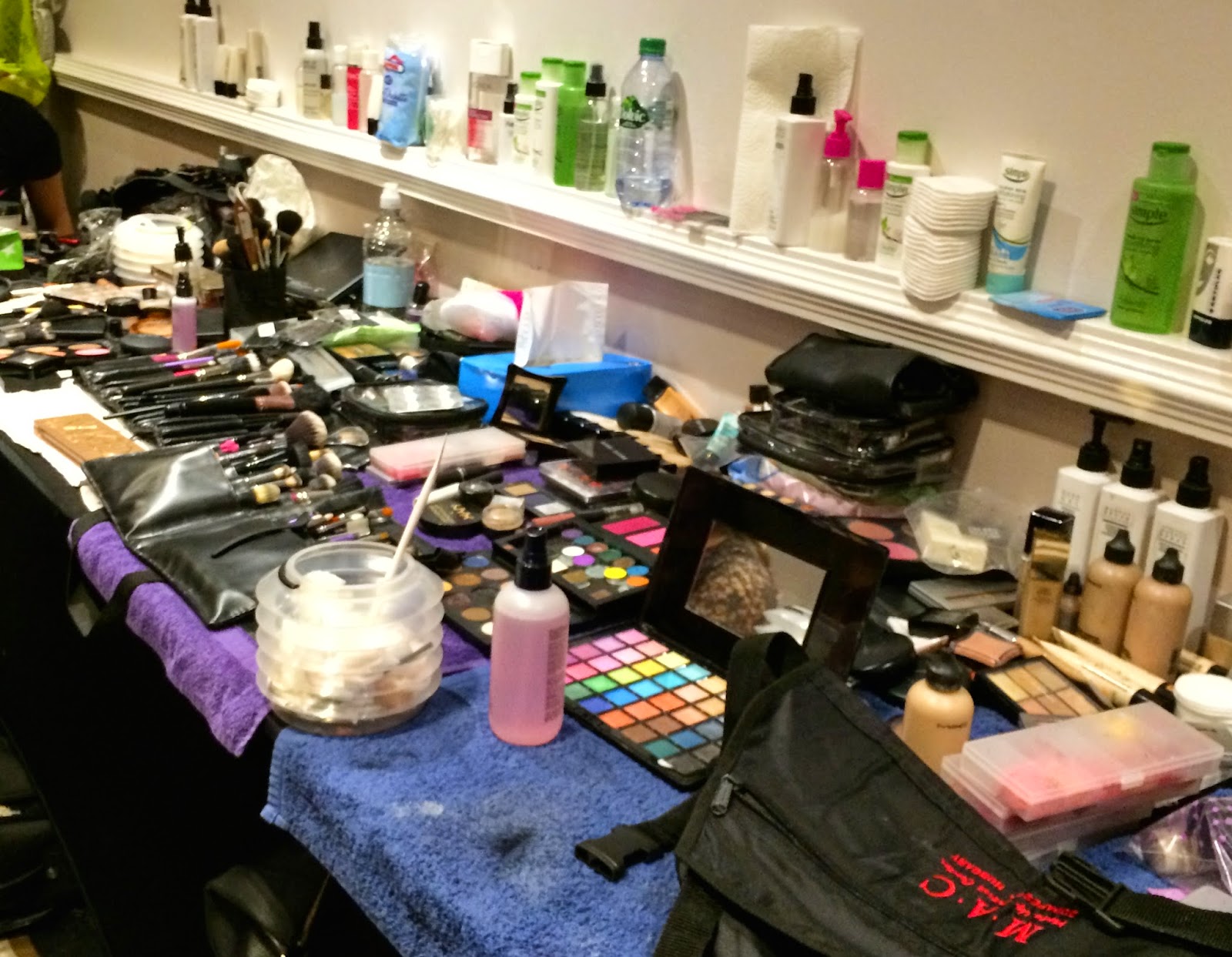 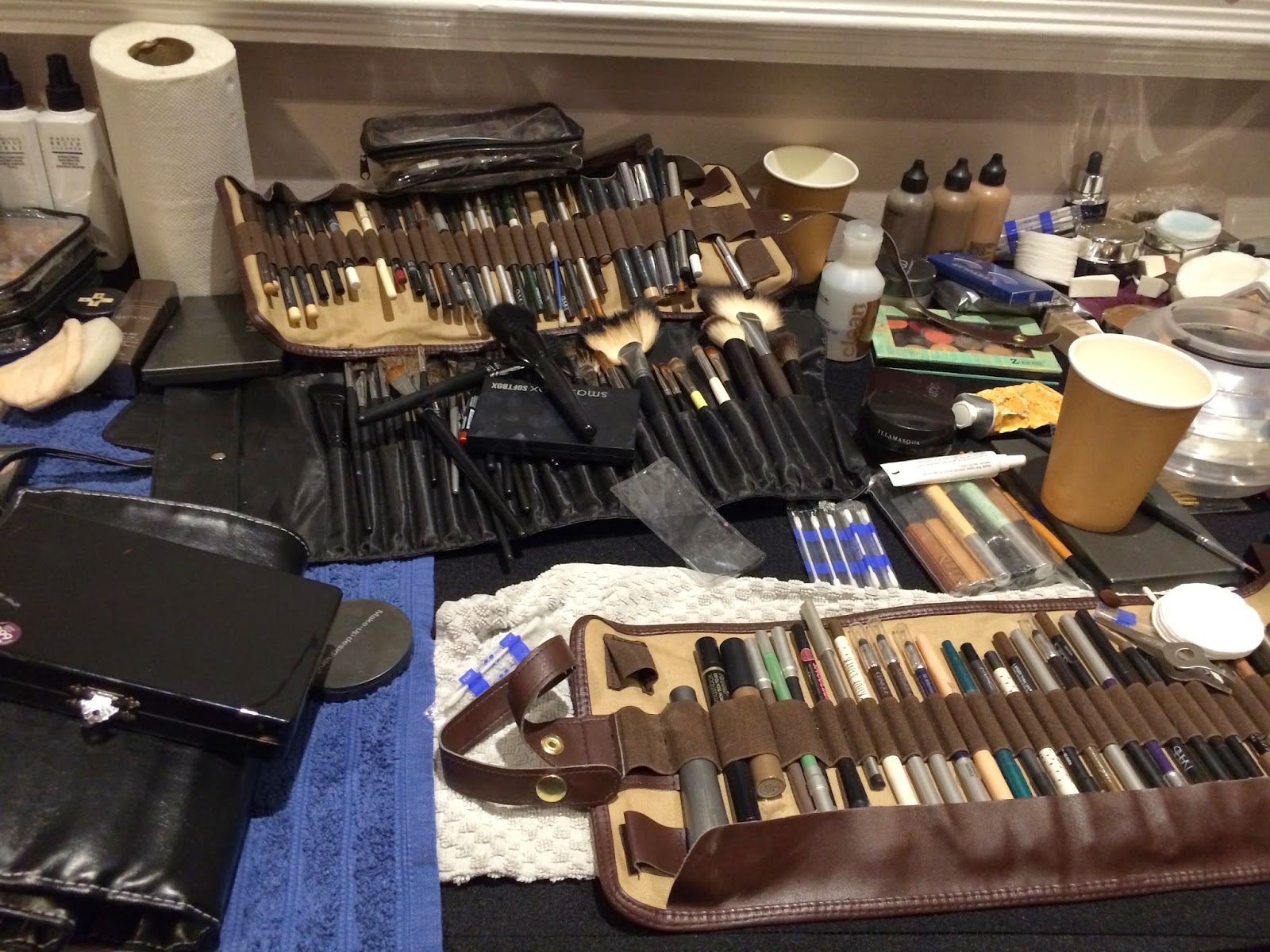 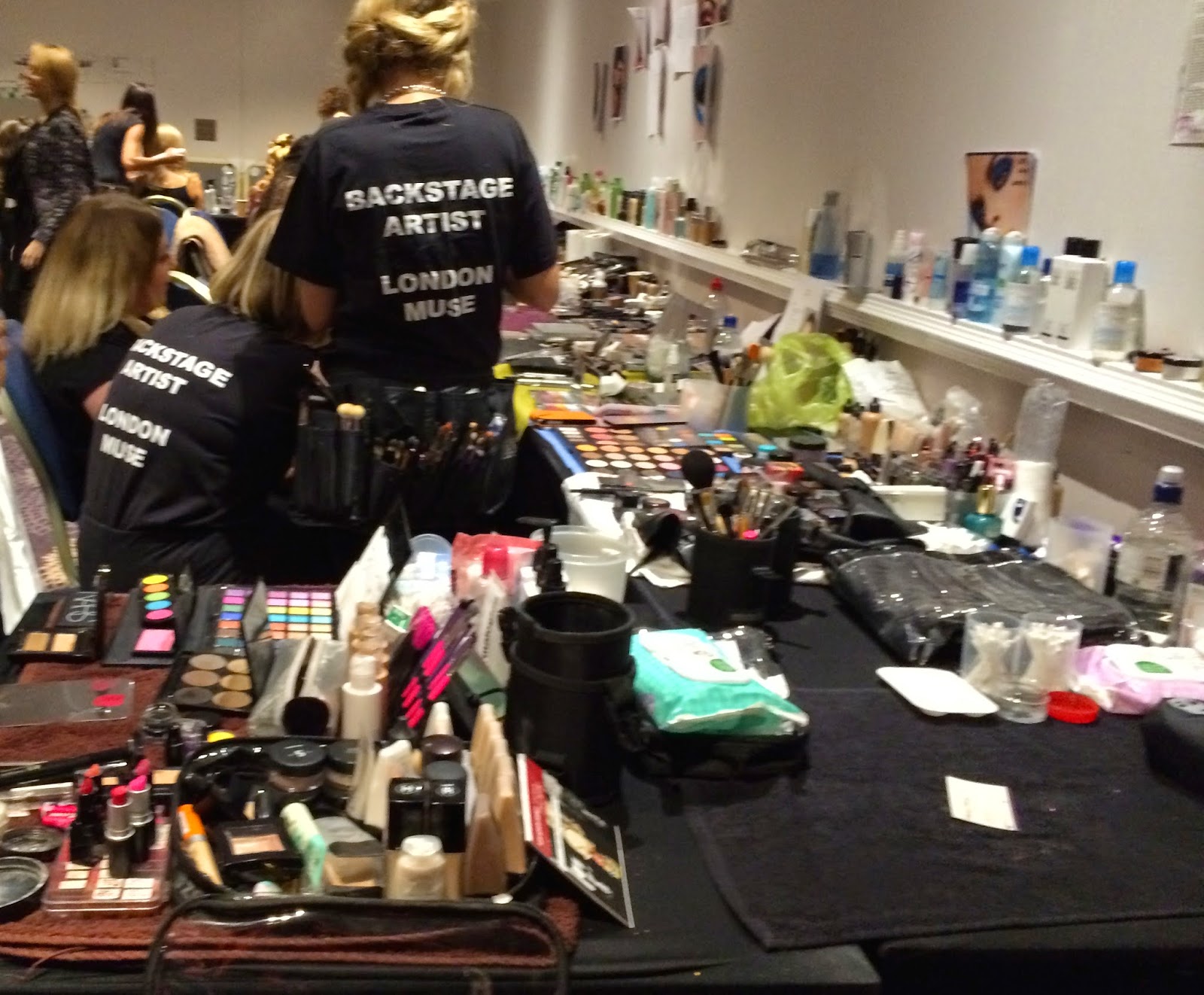 Obviously, it
all started with me panicking about what to wear on Facebook, as I’d
never been to anything
at London Fashion Week before! I dutifully went with black, as
everyone had told me to, with some killer Pavie
Gioelli chain earrings and my
faithful furry leopard ankle boots. When I got there I was welcomed
backstage by Luke and Nicci, and it was all remarkably calm. Models
were milling about in jewel encrusted and geometric patterned silk,
and the mother of all make-up collections was spread out on one side
of the room. I could pretend that I was like, totally cool, but the
reality was my mind was screaming “OHMIGOD, the girl from Tottenham
is backstage at London Fashion Week”. I know it sounds supremely
hackneyed, but everyone really was lovely, especially Nicci and her
London Muse Academy team who gave up their time to be there, who
didn’t seem to mind me nosing about while they worked away. 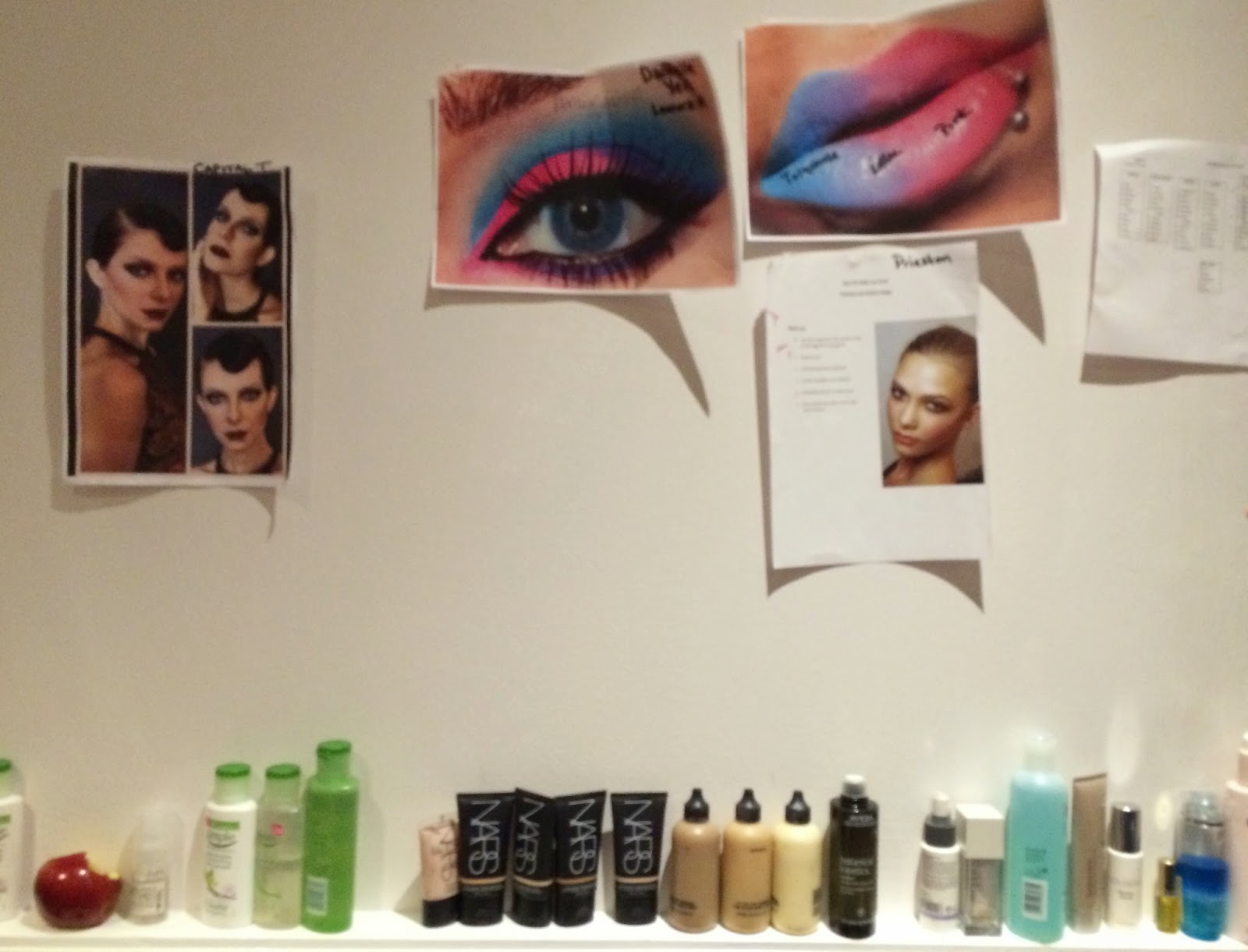 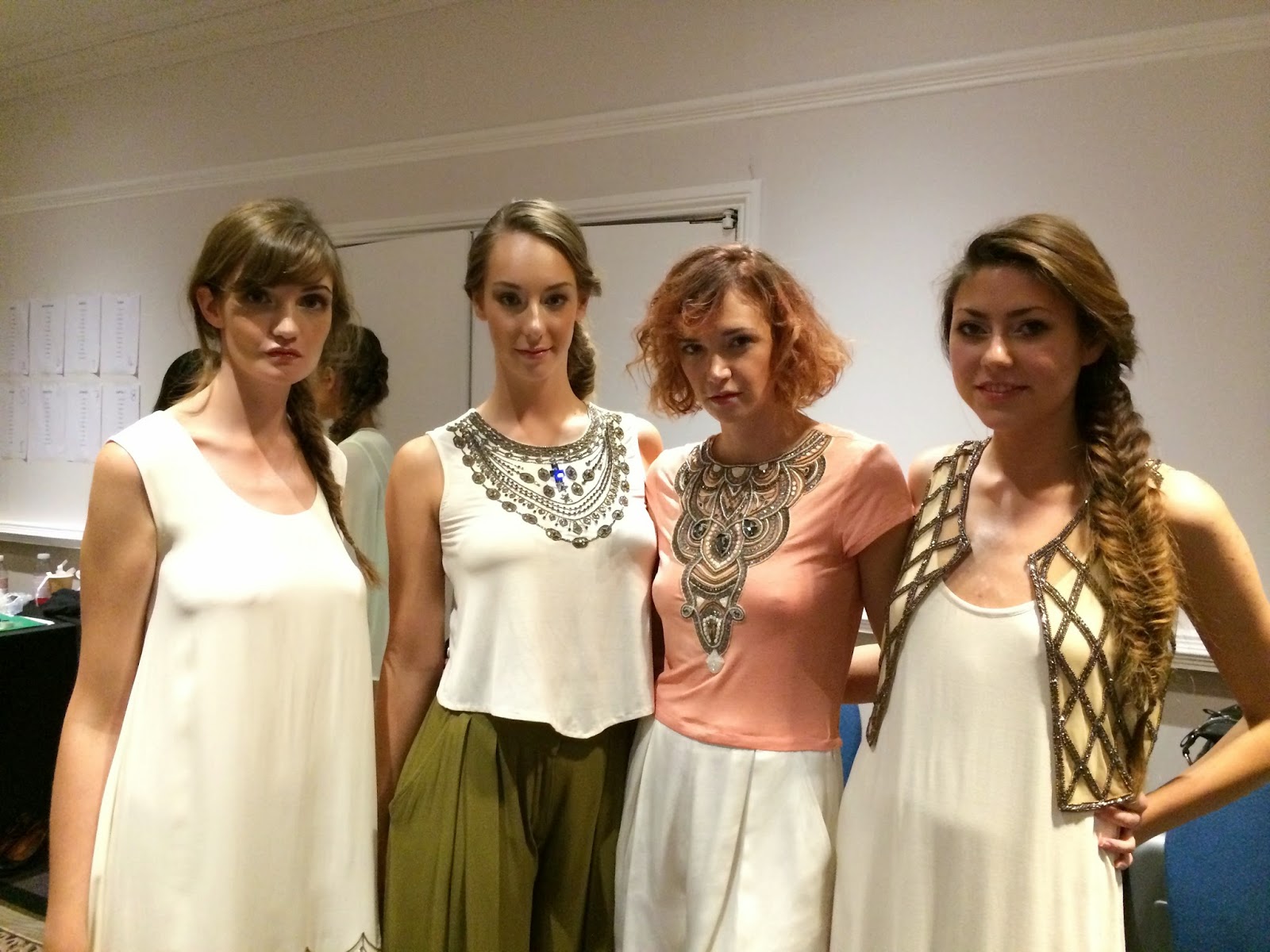 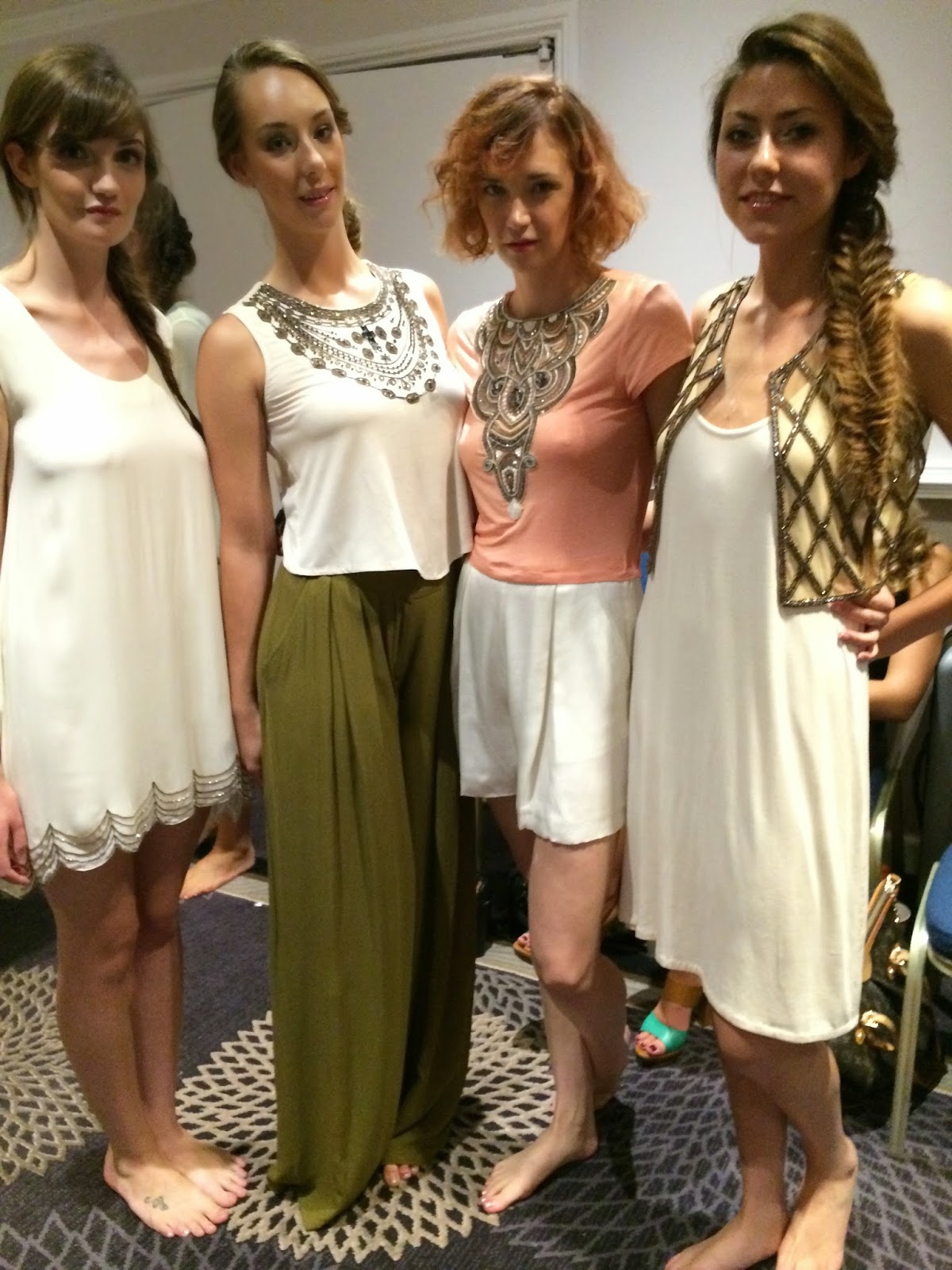 Luke and
Nicci had an impressive schedule with the corresponding series of
looks photographed, rehearsed and ready. As I was whisked away I got
to see the first few models ready to go for Naveda Couture (USA), the
diaphanous fabrics, shimmery beading, and olive, coral and cream
colour palette were set off by a gleaming metallic sheen on the skin
with fishtails plaits and natural curls. 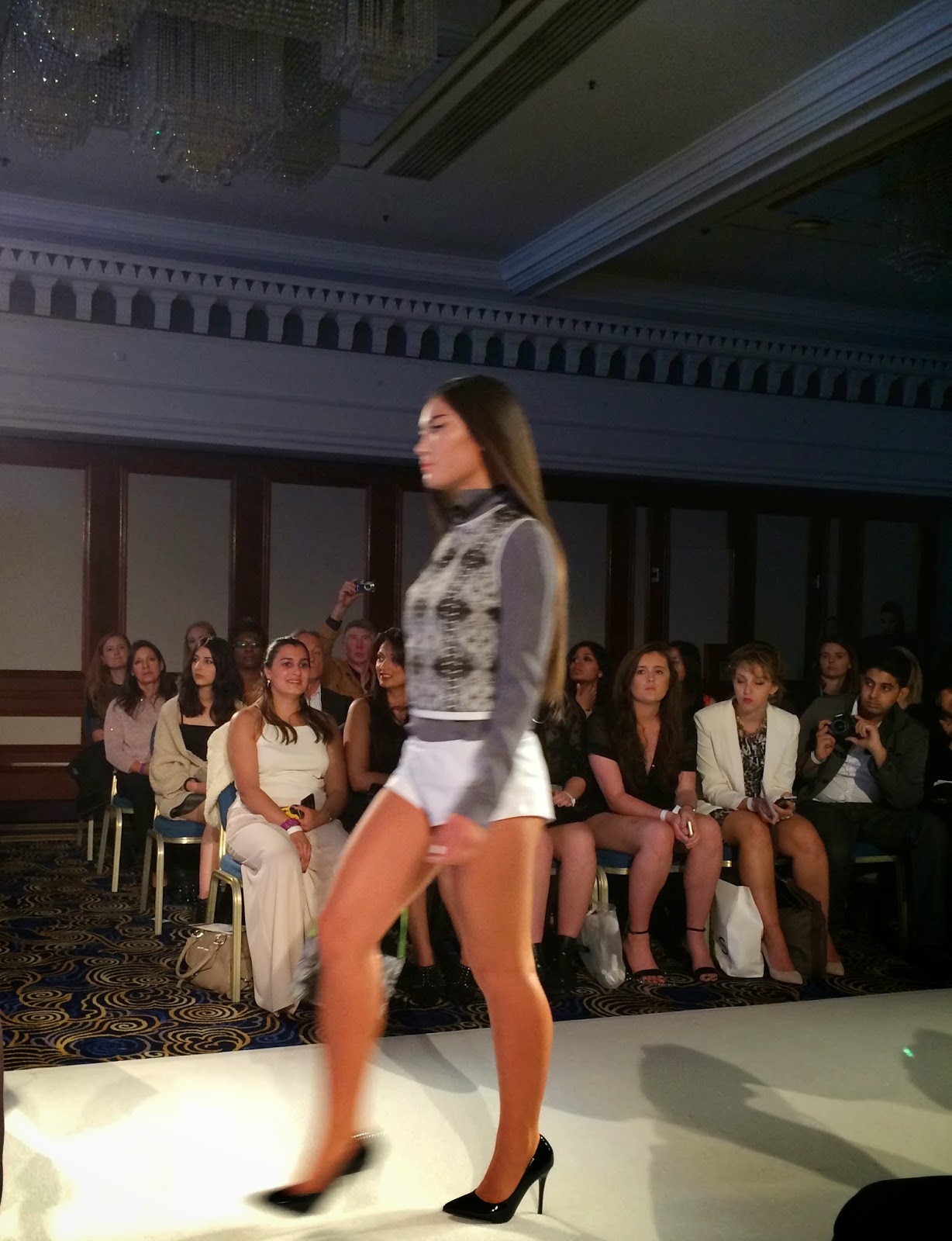 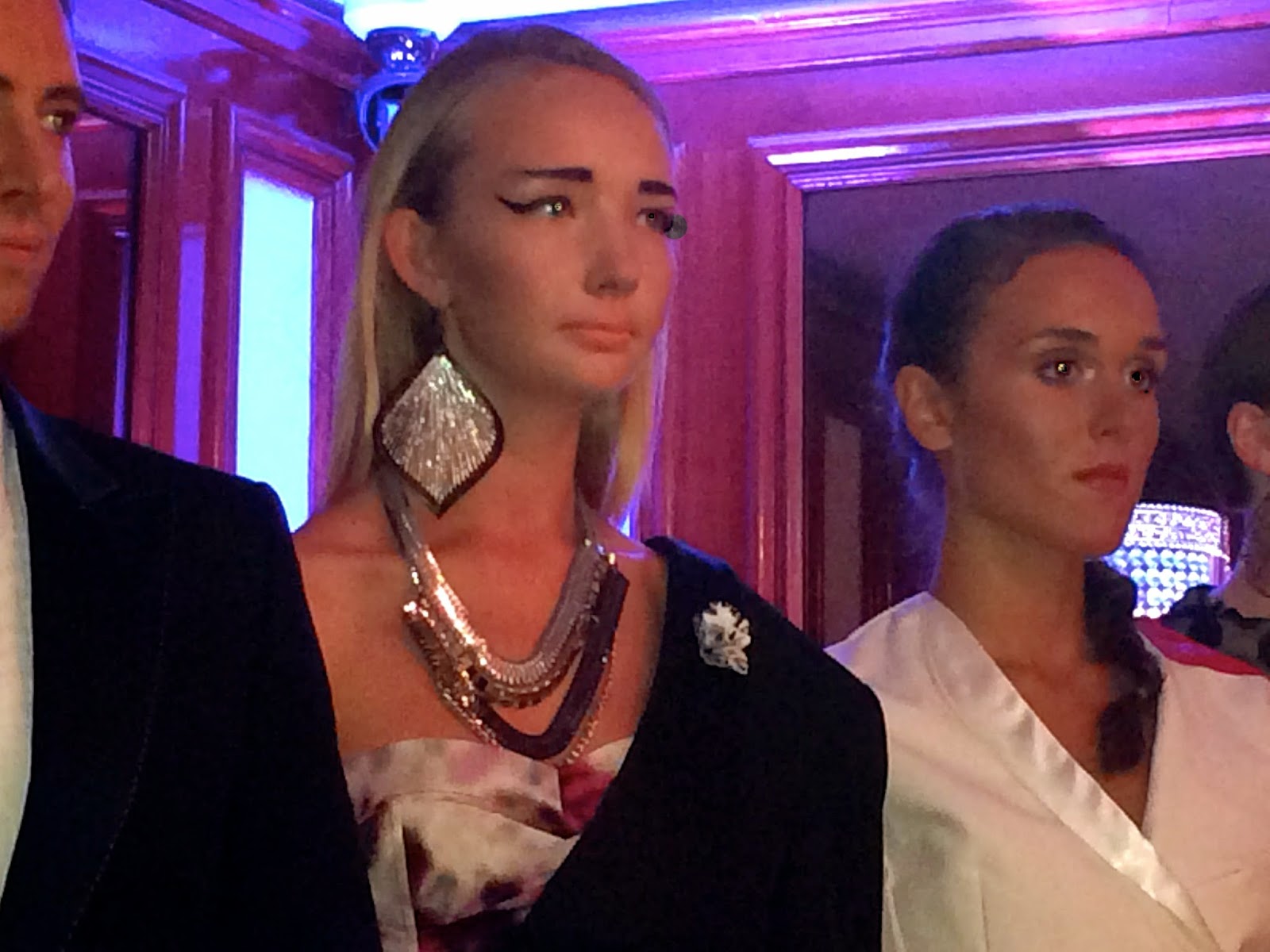 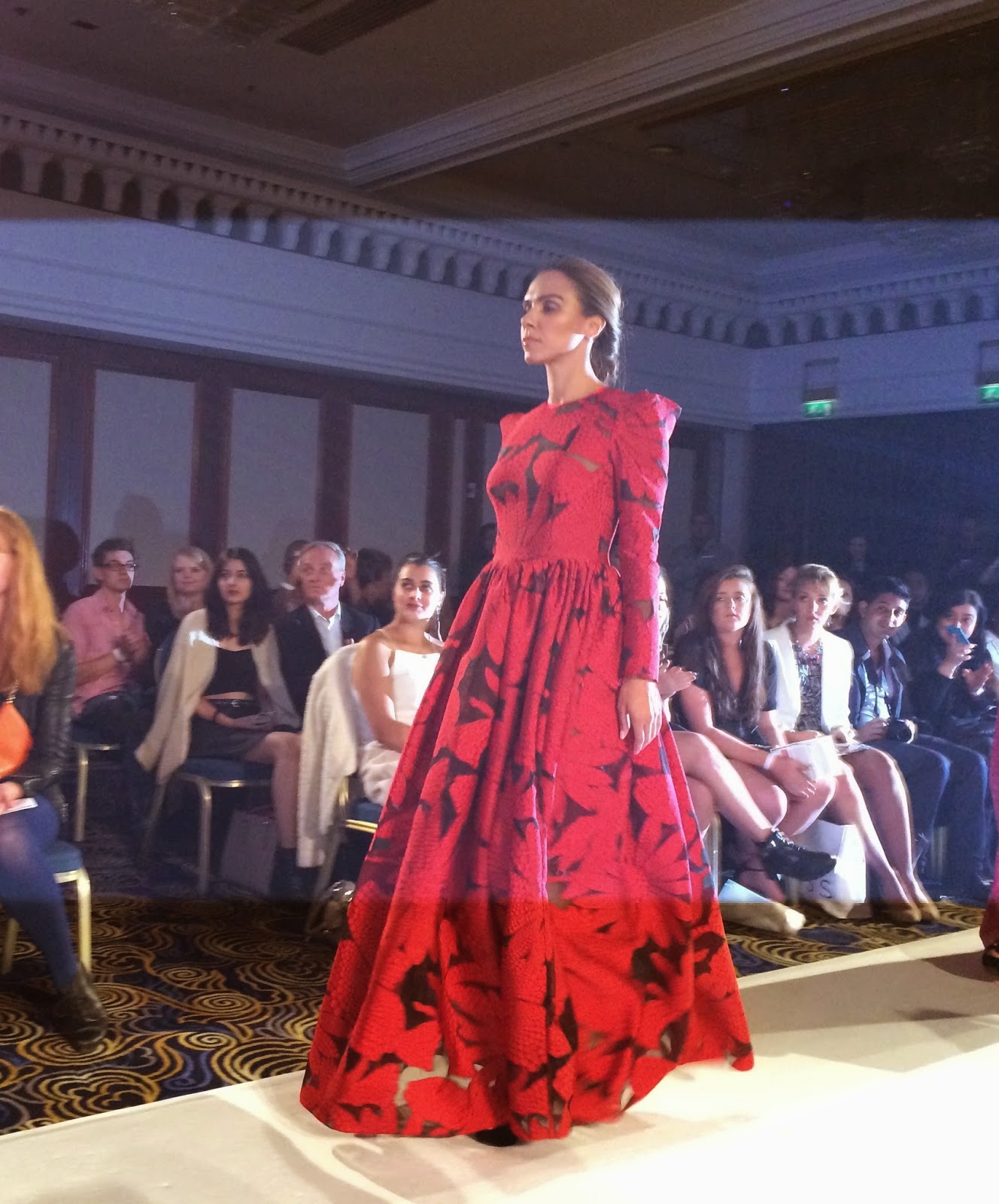 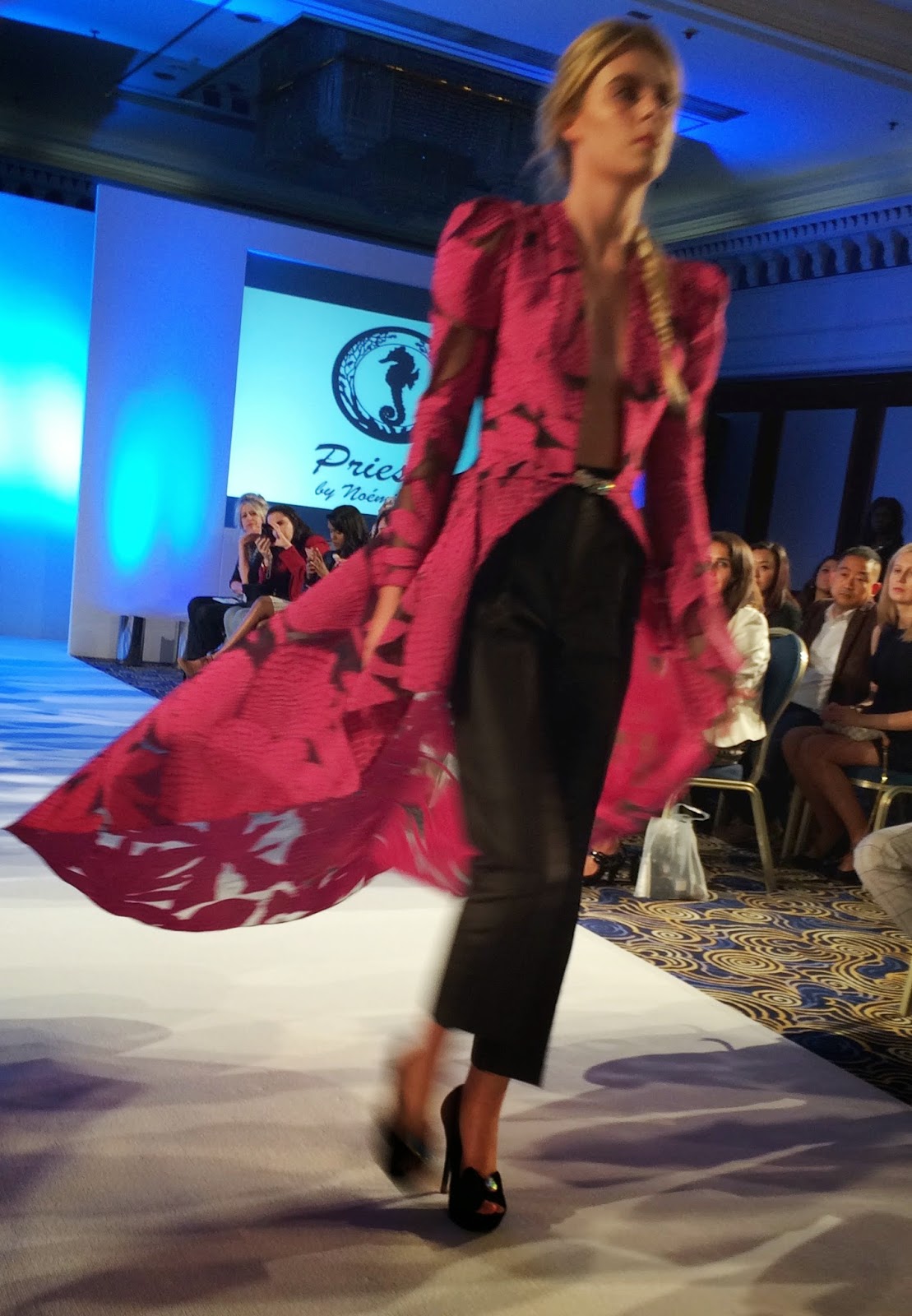 The
real stars were Prieston (Noémi
Nagy
Hungary) and La Mo Designs (Leonora Asomanin UK). Prieston in
particular, featured beautifully cut dresses in innovative richly
coloured and textured fabrics, modern floral brocades with see
through elements, Russian influences and crystal-encrusted bling. One
dress in particular made me and my neighbour sigh. It was a grown up
princess dress with puffs at the shoulder, gathers at the waist and
discreet V-back coupled with a saucy red floral fabric with see
through areas. I loved the baby-pink gloss used on models, the
sunkissed look with long tousled braids was really playful with the
full on drama of the Prieston stuff. 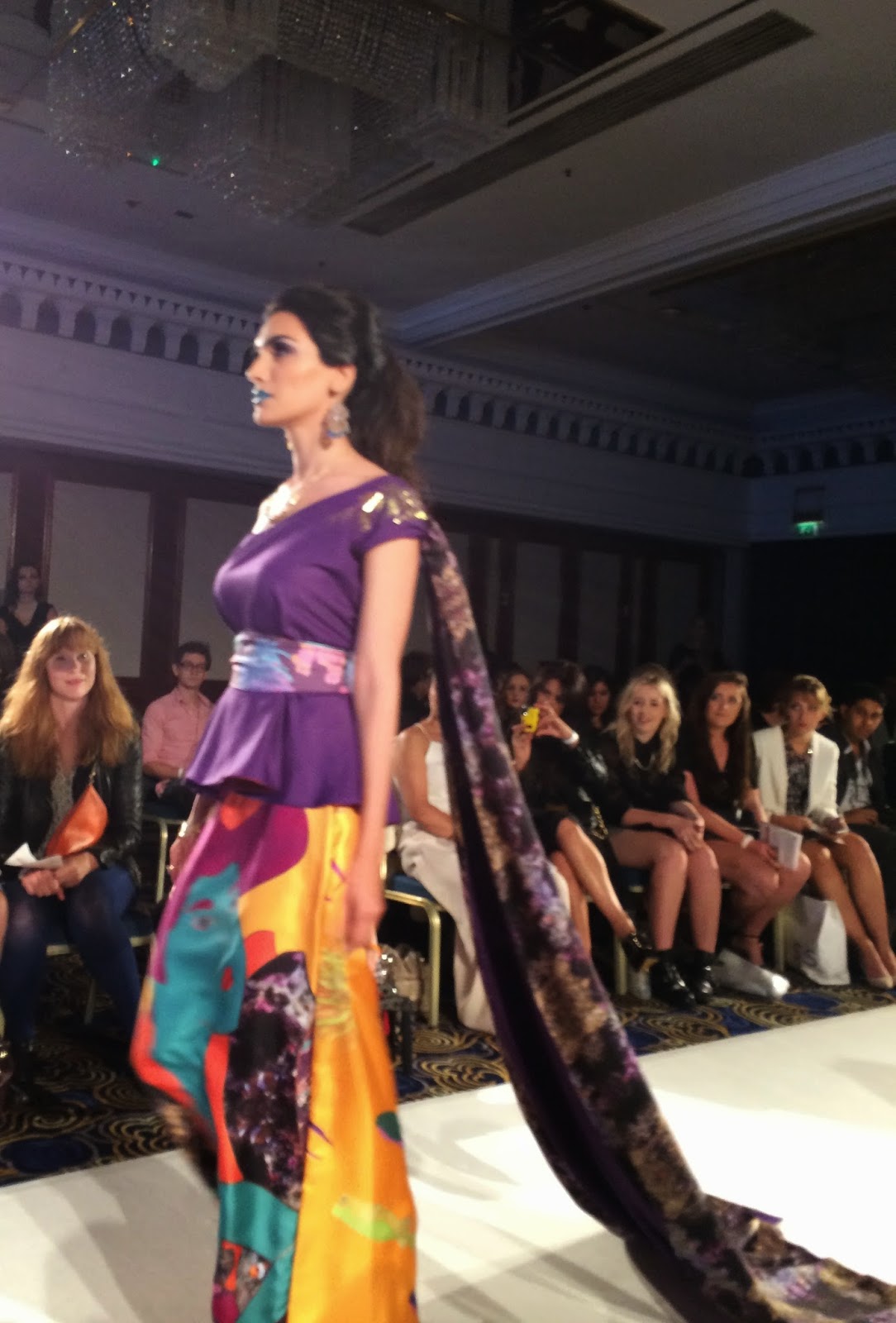 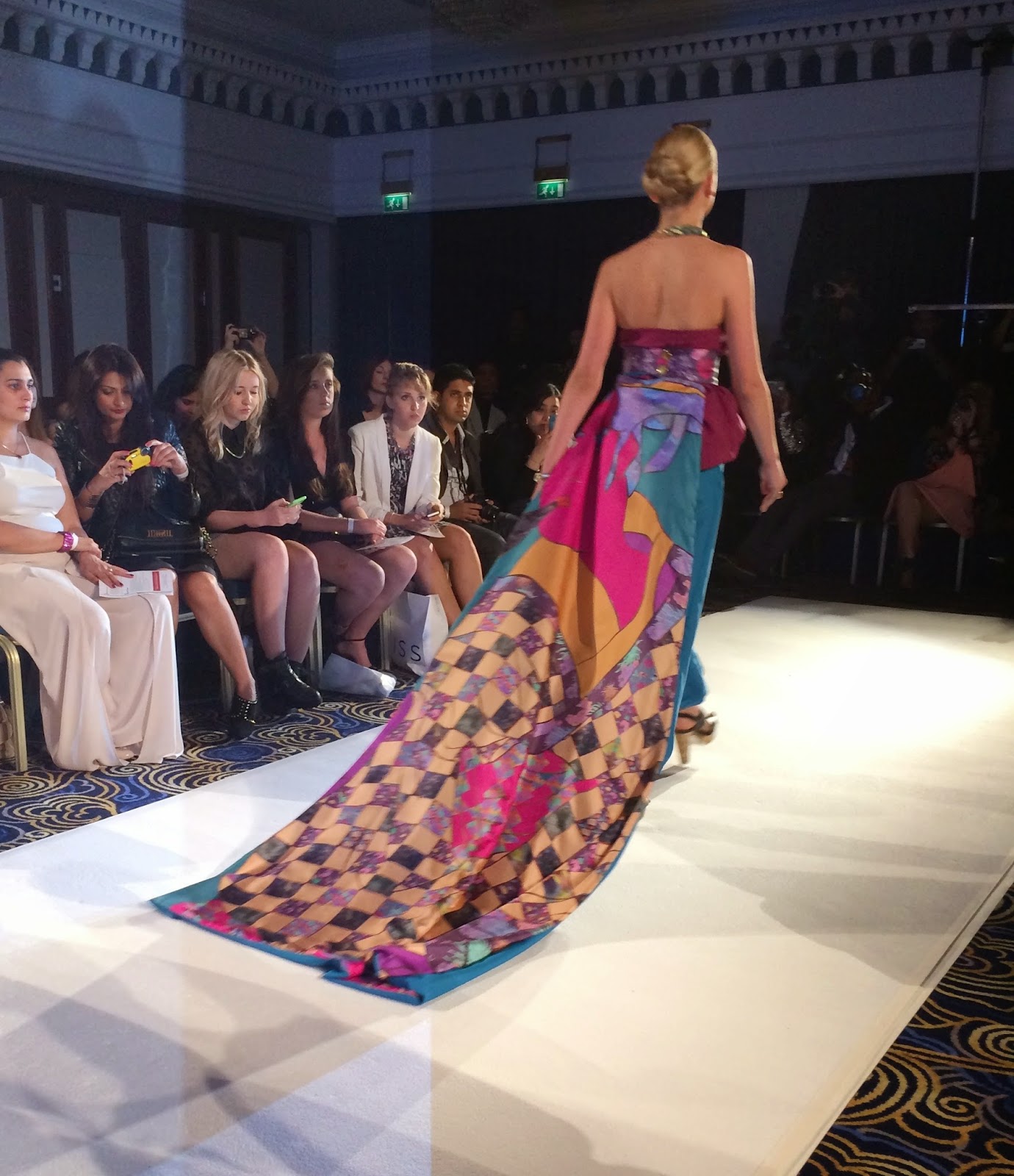 Asomanin’s
work was also structurally impressive, influenced by Japanese
traditional kimonos, though brighter with beautifully colourful
fabrics, long trains attached to belts and shoulders. Make-up was
strong and dark and goth-inspired, with both black shadow and lips,
or heightened colour, like blue, pink and yellow on both eyes and
lips. 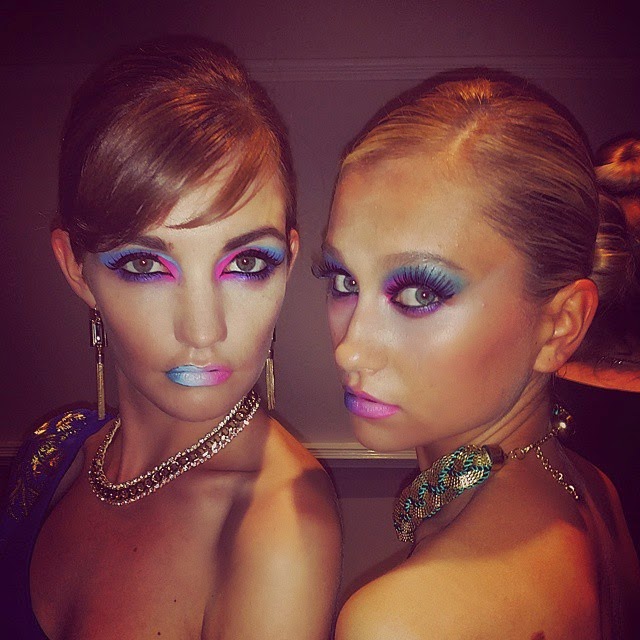 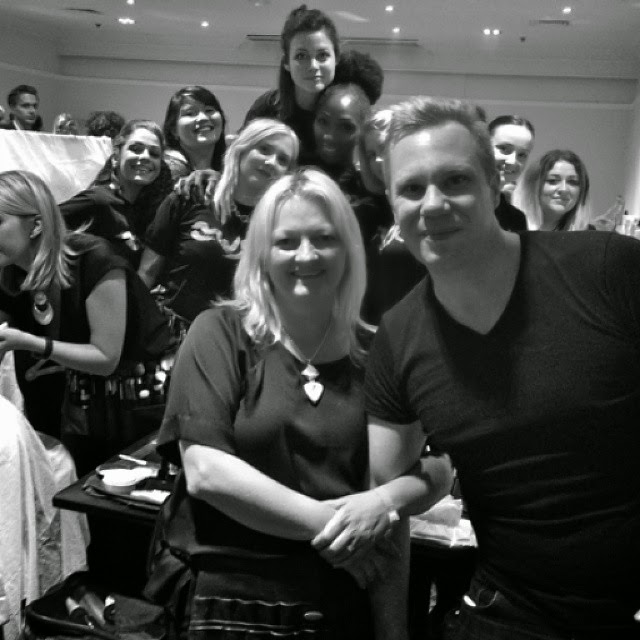 I
hadn’t appreciated how much hard work make-up for one of these
shows is before; Nicci, Luke and the rest of the team did a great
job. No wonder Luke said it was like a conveyor belt back there! The
amount of different looks and how they corresponded to each
designer’s work was a creative and organisational
feat. Tune in next LFW for more back-stage make-up stories,
meanwhile, I’m practicing sashaying in very high heels and triple
top knots with blue lipstick.