What I did at London Fashion Week … 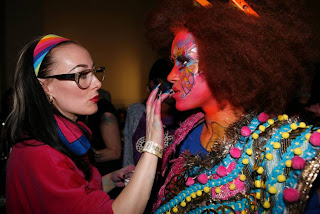 I was delighted to be invited backstage (as a guest of Illamasqua) at the House of Blues AW2010 fashion event at London Fashion Week recently. An opportunity to get to see Alex Box work at close range was an offer I simply couldn’t turn down, and after reading this interview with Johnny Blue Eyes on Helen and Sheenie’s Nice Things the other day, I knew that this was going to be a day to remember! Believe me when I tell you that I haven’t laughed as much or been quite that embarrassed in a very long time.

After meeting up with Helen, Sheenie and MizzWorthy, we had a brief Fashion-off (a competition I sadly lost in spite of my sparkly Converse) and then headed to the Freemason’s Hall to find out where the action was.  We were thrust straight into the thick of things, and greeted with the words: “ARE THESE MY BLOGGERS? COME HERE, TALK TO JOHNNY! ASK ME ANYTHING MY DARLINGS, WHAT DO YOU WANT TO KNOW?”

(Johnny Blue Eyes is the only man I’ve ever met who speaks in capitals. Imagine Brian Blessed with a hint of Julian Clary, and you’ll be – somewhat – on the right track. For the sake of my sanity though, and your eyeballs, I’ll render the rest of his conversation in proper grammar from here on)

Having been nudged to the front of the receiving line – Johnny was having his hair done at the time – I rather sheepishly asked what we could expect from the show, and the answer was rather surprising (apologies for this in advance, I’m writing this bit from memory), for me, at least.

“It’s about colour, it’s about peace, it’s about love.  It’s a reaction to the lack of colour in the world, the recession, natural disasters.  Why should winter collections be dull? I’m bringing colour – like the colour of your eyes darling, that’s an amazing shade – to the the world”.

Pulling myself together a bit, I asked if he was deliberately giving people the opposite of what they’d normally expect from a winter collection, and his answer was yes, and deliberately so, what he was trying to do was “democratise fashion, make it for everyone.  I’m a 42 year old man, and I’m surrounded by love.  All my models here today are real people, they’re my friends, they’re all shapes, all sizes, all ages, all sexual orientations, we’re all people, and we’re all the same, so I want to include everyone in this show, it’s ALL ABOUT LOVE”. 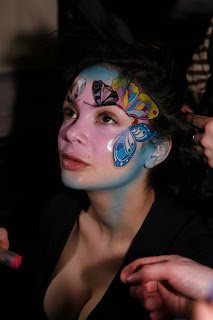 At this point, I moved onto have a look around the – crazily chaotic – room, and spent some time watching various makeup artists doing their thing: 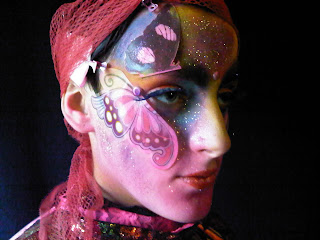 I found out that the models were all made up with the same base Illamasqua products:

Cream eye shadow in predator was used on the faces, which were then highlighted with both liquid metal in Solstice and pure pigment in furore. The cheeks were contoured with a fushia pink cream blusher in Dixie and the lashes used were no9.

Then, once she had a chance to take a breather from creating Johnny’s rather dramatic look for the show: 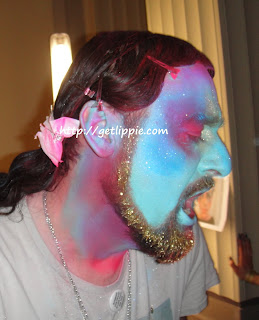 And once we’d all had a chance to recover from  Johnny’s rather, erm, “colourful” call to arms to the women in the room (seriously unrepeatable here!), and I after I’d recovered from being serenaded  (pic above) by Johnny himself (about the most embarrassed I’ve ever been), I had a chance to chat with Alex Box herself.  We discussed colour, and style, and beauty blogging.  I’ve long been a fan of her work, and this was an amazing opportunity.

What one thing would you want women to take from these makeup looks that you’ve created today?

Lipcolour! Different lipcolours, different placements, being braver with the placement of colours, not just saving it for their nails or their eyeliner. Take blue onto the lips, more hot pinks onto the cheeks, maybe yellow to highlight.  Basically taking the colours you’re used to, your palette, and moving it around.  You don’t have to go out, just sit in your house in it, and see how it feels!  It’s to play with, makeup, it washes off.  People will commit more to a tattoo than they will with, say, a new eyeliner, and I find that really quite … mad.

Why do you think women are so scared of using colour?

Because they want to be attractive, and colour has always been about playfulness. After about 13, women tend to, you know, stop putting bright colours around the eyes, and start wanting to attract boys, and look pretty. The thing is, I don’t mind standing out, and Johnny doesn’t mind standing out, and people say things like “Well, you don’t mind looking like a freak, but I do” but I think there’s that spirit in everyone to want to do something. It’s about helping each other out, and instead of taking the piss out of people for wearing it (different makeup), we should get together, maybe get into a group and do it.  It’s the tipping point thing, once one person does it and then the 3rd /4th person wears, say a black nail, it’s like “oh my god it’s an overload” and then everyone has black nails, and it’s okay.

It takes role models, and people to push things along.  Like Amy Winehouse, and those massive ticks of eyeliner, it’s a little bit full on, and very much home-done.  And after that, girls were a bit more adventurous with their eyes, and now we’re all wearing black eyeliner.

Do you think House of Blue Eyes is a very typically “London Fashion”?

Yes, House of Blue Eyes could only exist in London or California.  The thing about Johnny is that he could go anywhere, but here in London it’s that we just accept individuals a lot more than Paris or New York.   Paris is very safe, they love their Cirque Du Soleil, they love the absurd, it’s all in the kind of subculture, it’s just not on the streets.

French girls don’t wear makeup, they’re Mademoiselles and it’s not till they turn into Madame that they wear makeup.  The French girl look is just great glossy hair, maybe a little bit of lipbalm, and it’s not till they turn 30 and become Madame, and then it’s all about great hair and great lipstick, but it’s all a bit safe, incredibly straightforward.  They love us, but it’s all from a distance.

How long have you been doing this for?

Ten years, 11 years, but  I guess all my life.  It landed on me really, I was working as a painter and I started doing stuff on bodies, and using bodies in my artwork, and then kind of everyone else turned me into a makeup artist, if you know what I mean.  But I love it because I love people and that’s the thing about Johnny, there’s just this  really infectious spirit, and when you add that into makeup and people and clothes, it’s just really great.

I’m really happy to be working with this. With Johnny there isn’t this money thing, as soon as it turns into money, and a collection, and producers and backers, it’s very hard for the spirit to be there, but when you’re free from that, then the spirit can just perform and it’s all about the performance really.  I mean the clothes are there but it’s about the message.

It’s very indicative of our time, advertising-wise everybody is so over being branded, it’s much more emotive now, and it’s much more about moving towards feeling things. We’re coming out of a recession, and everybody is re-evaluating things and thinking much more about who they are, what they are and why they’re buying things. So I think that the unifying consciousness, is that if people are buying things, they’re going to buy it because they think it’s something that is going to help them, or that you (as a producer) have a soul.  The whole, buying, buying, buying, branding, branding, branding thing is gone.  People can’t afford to do it now either, so people are going to want to buy an item that means something, that it meant something for that item to be made.

What do you think of beauty bloggers? Some people find us controversial.

Well, there’s a two pronged thing, there’s a worry by people who’ve spent a long time being professionals, or learning a craft, they feel that if Joe Public goes to a website and looks for an eyeliner, and the first hit (on the web) isn’t by someone who has a background in makeup, then they might be getting the wrong information. And I think the general worry is that kind of thing.  That there might be people claiming to be experts when they’re not.

I think beauty bloggers  are not saying “Hi, I’m a makeup artist, and I’m showing you how to put an eyebrow on and it’s a bit shonky and not right”, that’s a totally different kettle of fish.  I think beauty bloggers are fantastic because it’s a true voice without any fettered in-between bits, nobody telling you what to write, no obligations. It’s honest. You can make or break products, and I think that’s a lot of what people are worried about, because they might have a shitty product and before, magazines would say “It’s a blue by so and so” and you go out and get it, and it’s “What, this isn’t blue, in the picture it’s blue” but that’s because it’s a lie, it’s not in the products, you know. And beauty bloggers are seeing through that and saying this works, and this doesn’t work, so companies live and die by the sword now.

At this point we were interrupted so the show could start …

7 thoughts on “What I did at London Fashion Week …”