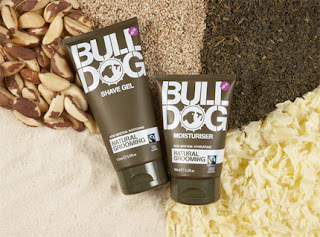 MrLippie’s been dying to get some more review action in, so it’s a double-whammy of organic goodness for you this weekend (I have something rather lovely to show you tomorrow, so stay, er, browsed!).  Again, this is a sample I picked up at the Natural and Organic Product show recently, and I made the boy change his shaving habits for a while to try it out – I don’t think I was the target market for this one, somehow – and these are his rather … random … esoteric …  geeky … er, you’ll see, thoughts on the shaving gel in question:

Ever since a Roman took a look at a hairy tribesman and thought ‘I’m not going out like that’, shaving has been a mainstay of Western male grooming habits for nearly 2000 years. Admittedly, there’s been the odd blip, such as the Vikings, or those fantastically moustachioed men of the 1800s, but, by and large, smooth-skinned cheeks have been the norm. With the slow demise of the professional shave by a high street barbers and the rise of the handheld razor as championed by Gillette/Wilkinson Sword/Bic/etc, companies that produce shaving products have merrily marketed themselves as the “Mans’ Choice”, and often featured sports stars of varying fame and the occasional scantily-clad lady in a shameless appeal to the machismo and testosterone that surrounds the whole idea of running very sharp blades of steel over your face and throat. 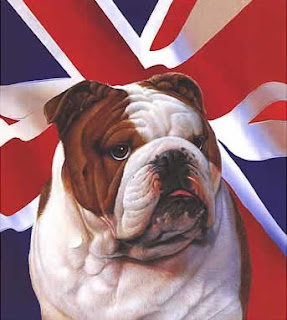 However, with the emergence of Organic Products, and the whole Green lobby, these companies have found themselves in a bit of a quandary. Mainstream Male aversion to ‘metrosexuality’ is still fairly strong, but it’s tempered by a growing eco-awareness, which begs the question: HOW can we market these products without diluting the aura of “manliness” that surrounds shaving? In Bulldog’s case, their Eco-System Shave Gel has an obvious difference to their normal range. It’s green. Not just any old green, but olive drab, which immediately put me in mind of army colours. Soooo…an interesting start. Then, looking over the tube, there’s a prominent label of ‘Natural Grooming’. Ok…Bulldog….Natural Grooming…ok, that’s a BAD image in my book. Moving on. I had a bit more of a look at the packaging, and came across a little homily about Dad saying how “Nothing in life is fair, son”…which left me sighing, to be honest. The whole thing just SCREAMS mixed message…I just thought they were trying too hard!

The Gel itself is aromatic. Very aromatic. It reeks of herbs and green tea, and it’s not really the nicest smell to rub into your face first thing in the morning. That said, it lathers up nicely, and yes, your skin feels smooth & doesn’t sting at all as you shave. Which is nice. So, functionally, it works, quite well.

Sadly, for me, the mixed messages and the overwhelming smell rule out this as a long-term option. It was nice to try, but I think I’d probably prefer to try some of the original Bulldog products, just to clear my head of the whiff of green tea and the horrible image of a Bulldog getting involved in “Natural Grooming”…

So, er … there you have it!  This product is from Bulldog’s new Fairtrade range, and the shave gel contains green tea from Sri Lanka, organic shea butter from Ghana, organic sugar from Paraguay, sesame seed oil from Nicaragua, and Brazil nut oil from Peru. Personally, I think it smells rather nice, fresh and green actually. The products are available from leading supermarkets, and you can find out more about the range here