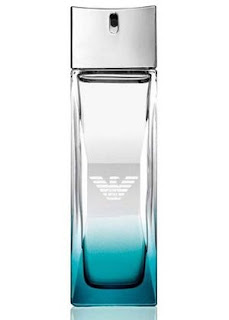 I’ve been using Armani Diamonds for a little while now, and I thought (or, rather, was reminded) that it’s about time that I put my thoughts on it down on paper, as it were.

Looking at the bottle itself, it’s a chunky rectangular bottle, with a hint of blue/aquamarine at the base that gives the liquid a slightly mysterious look. The top is dominated by the spray nozzle, which is a heavy silver top that accentuates the slight curves of the bottle very nicely. The stylised Armani eagle is on the container, but it’s not overbearing, it adds to the look, making the bottle itself quite imposing.

The smell on first spray is quite sharp, almost like raw alcohol – it felt seriously eye-watering when I first put it on. There’s quite a lot of citrus in there, which persists quite strongly for the first half hour or so, but there’s quite a lot of interesting undercurrents that slowly rise to the surface and subsume the citrus. It make the scent slightly musky, but delightfully subtle and softer. I tend to use this most weekdays, as it’s not something to just throw on just before going out – but it IS something that you feel comfortable wearing throughout the day, without fear that at some point you’re going to smell like something that’s decomposing in the corner – never the best at a crucial afternoon meeting, I find.

Overall, I like it, quite a lot. No whale bottoms here, Diamonds certainly manages to grab the attention.

Get Lippie says: I’ve noticed that this appears to be MrL’s favourite scent by far this year, and it’s become his “go to” fragrance for  everyday wear, not that I’m complaining!  Redolent of lemons at first (there’s meant to be a hint of mint there but I can’t pick it up), it soon settles into a woodsy smoothness that’s subtle, but masculine.