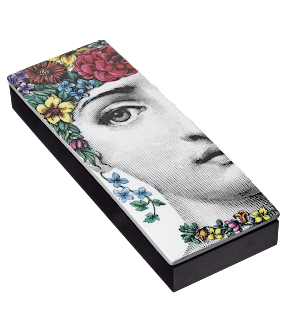 To my intense dismay, having enjoyed many a scented adventure through Odette’s work, I was unable to attend the Kodo Incense Ceremony arranged by Odette Toilette last week. Luckily, however, the lovely Callum Bolt was able to take my place at the ceremony, and here he gives us a fabulous round-up of his experience:

Last week, what was supposed to be another dull day at the library ended with one of the most memorable evenings I have had in quite some time. Odette Toilette and Fornasetti Profumi were hosting an evening of Kodo (an ancient Japanese incense ceremony) with junior master Souhitsu Isshiken Hachiya in Conran’s gorgeous shop in South Kensington Unfortunately Ms Lippie was unable to make it so I leapt (almost literally) at the chance and soon I was packing my books away and heading for what promised to be a quite incredible evening.

After draining my glass of champagne and discussing with some others what we expected from the ceremony (none of us were quite sure), we sat cross legged on the floor and Odette opened the evening by briefly talking of how she had come to learn of Kodo by chance in a book she had read some years ago. We were then introduced to Souhitsu, junior master of Shino-ryu; a school of Kodo that has been continuously passed down the generations for over 500 years (Souhitsu’s father is the 20th master, and he will eventually become the 21st).

Souhitsu began by performing the Kodo ceremony himself in silence. The delicacy with which he handled the tools, and the absolute precision of each gesture, were utterly hypnotic. On a wooden tray there was a small pot, decorated with Chinese paintings, and filled with ash that hid a burning piece of charcoal. Also on the tray were a selection of utensils and a small paper packet containing the incense bark. The ash was pressed into a cone shape with something resembling a fish knife, then with a little white feather any loose ash was dusted away. Souhitsu then made 50 lines on the slopes of the cone which represented the 5 elements of Chinese philosophy: wood, earth, water, fire and metal. This done, a tiny square of glass was placed on top of the ash, upon which Souhitsu put the incense that would be gently warmed. Then he took the pot in his left hand, while holding his right over the ash in order to check the temperature, and leant forward and inhaled the scent.

Once the ceremony was been completed, and we were all captivated, Souhitsu began to speak. (I must mention the incredible lady who was able translate for Souhitsu so effortlessly that I almost forgot that he was speaking Japanese.) He instantly proved to be a charming fellow – warm, funny and very knowledgable. We heard of how, in Kodo, they do not ‘smell’ the incense but rather ‘listen to’ it using all of the 5 senses in order to appreciate absolutely the subtleties of the scent and the effect it has. He went on to tell us of the importance of our sense of smell: though we have become a culture obsessed with sound and vision, our noses hold the key to our more primal instincts. He used the example of a cavemen needing to be able to sniff out prey and predator in order to survive.

Next, we are given a brief lesson on the importance of incense in ancient Japanese aristocratic seduction. Around 1000 years ago, Souhitsu tells us, men and women would not look at each other’s faces and because of this men had to get creative. They would write haikus, scent the paper with their finest incense and post them to the lady (or ladies) that they desired. This made the process of courting a rather drawn out affair – especially as, if the lady didn’t like your poem, or thought that your incense smelled horrid, then she would simply not reply. Even when the the the lady did reply, there had to be a long exchange of letter before the pair could finally meet, which they had to do in the lady’s home. In the dark. In fact, so strict were the rules about not being able to see each other that the gentleman had to leave before the sun rose in the morning, because of this the incense used to scent the clothes became hugely important. They were judged almost entirely on their scent, and therefore it had to be good.

Souhitsu then spoke a little on the art of Kodo itself. Kodo, literally meaning ‘the Way of Incense’, is not something that can ever be learnt but is a lifelong process of learning. Souhitsu spent a year living in a temple with a priest in the mountains in order to begin to master the art of Zen (becoming ‘nothing’ through meditation), but said that it takes decades to truly be able to experience it properly. The state of Zen is integral to Kodo as you must be experiencing nothing but the incense, allowing it to conjure images, memories and emotions freely. (Souhitsu, apparently, is often reminded of the rice fields near his grandparents when he used to visit as a child.) Kodo began during the Muromachi period when an aristocrat asked for all of his incense to be classified and evaluated, during the course of this process the ceremony took shape. It soon became very popular throughout Japan, being used by almost everyone from the Samurai who performed the ceremony before battle to the aristocracy for whom it was a fun game. The incense is most often described in terms of taste: sweet, salty, spicy, sour and bitter

Finally, it was time for us perform the ceremony. Once again Souhitsu prepared the incense by placing it on the hot ash, and then passed it around the room for each of us to smell. There were two different barks which he told us were both “completely different”. When the first incense made it’s way to me I was surprised – this was not the church-like smell that I had been expecting, but something altogether more subtle, softer. Firstly, there was the familiar scent of hot charcoal and ash but once I had disregarded them I discovered a beautiful fragrance that made me think of blonde woods, and reminded me slightly of being in a sauna (so perhaps I wasn’t able to disregard the charcoal as successfully as I had hoped.) The second did indeed feel different. This bark was brighter and had a brilliant saltiness to it. One lady said that it made her think of the sea, while someone else was reminded of the woods and animals such as deer. Souhitsu was careful to be incredibly diplomatic telling us that all of our responses were correct, and that his impression of the first bark was that of a beautiful sunny day with blue skies and not a single cloud in sight.

And with that, it was all over. I could have happily spent several more hours listening to Souhitsu talk of his art – his knowledge of the history of Kodo was fascinating and as a speaker he was brilliantly entertaining. Odette was back to thank Souhitsu and make not-so-subtle hints that he should come back to the UK soon (which I sincerely hope he does.) Then it was time to head home, with a rather-handsome incense box courtesy of Fornasetti Profumi and Nippon Kodo.

You can find out more about the amazing events put together by Odette Toilette here.

The Fine Print: Get Lippie and Callum Bolt bought and paid for the tickets involved for this event.

This post: Kodo Incense Ceremony With Odette Toilette originated at: Get Lippie All rights reserved. If you are not reading this post at Get Lippie, then this content has been stolen by a scraper