I probably get more email about the Boots Avert Cold Sore Machine than I do anything else this year, so I thought I’d let you know how I was getting along with it.

In the four months before the Avert turned up, I’d had, on average, one cold sore a week, so sixteen sores in a period of sixteen weeks.  In the three months since the Avert turned up, I’ve had … one. Which turned up late last week in response to an actual cold, so I can’t really complain about that.  I’d been zapping myself on a weekly basis as a preventative measure, and I think it had actually had an effect.

However, as a cure for the common cold sore, I’m not entirely sure the product works as well as I’d like it too.  As I don’t ever get the “tingle”-stage of a cold sore, my sores are already pretty well-developed by the time I’m aware of them, and I don’t think the Avert deals with already erupted sores all that well.  However, as a preventative measure, I think it’s great, and if you’re lucky enough to get the “tingle”, I have a feeling that the Avert really would help you heal faster.  As it is, I had to resort to Blister plasters once again, alongside blasting my lip several times a day.

A few words on how it works, as a lot of  people ask: 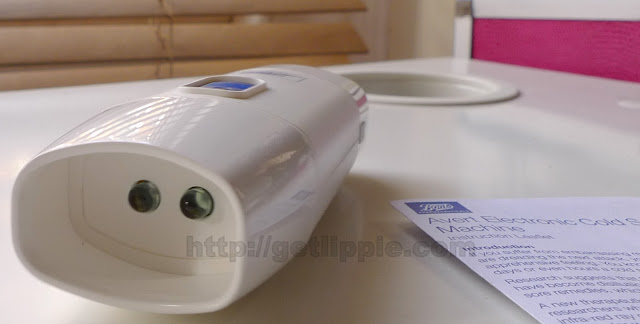 There is NO VISIBLE LIGHT EMITTED from the device in use – you can only tell it’s working because the green light on the on-off switch will flash.  It genuinely will look like it’s not doing anything while it’s switched on.  If your on-off switch flashes, you’re in business. Honestly!

If the light on the switch doesn’t come
on, or if the machine doesn’t beep when you move the switch, then it’s time to
replace the battery – you won’t be able to tell from looking at the
bulbs in the opening, as the light that they emit isn’t visible to the naked eye.

The device beeps when you switch it on, and it beeps again after three minutes are up (which can genuinely feel like quite a long time, actually), to let you know to either put it away, or move it to another part of your face.  I zap my lips and my nose, as that’s where I’m prone to sores.

I think that if you get the tell-tale cold sore “tingle”, then you’ll like the Avert a lot, providing you start using it immediately!  However if you’re like me, and the only way you know you’re getting a cold sore is when you actually get the coldsore, then the Avert is best as a preventative measure only.  I didn’t notice any speeding up of the healing-time of the cold sore that I had whilst I was using this, but I am grateful as hell for having so many fewer over the last few months!

This post: Boots Avert Cold Sore Machine – Update originated at: Get Lippie All rights reserved. If you are not reading this post at Get Lippie, then this content has been stolen by a scraper