Today, I’ve decided to to a side-by-side product test. Two of my all time favourite products are MAC Paint (which I use as an eyeshadow primer, as well as a colour) and Urban Decay Eyeshadow primer. Up until now, I’d be hard pressed to say which was better, so I’m trying them both out at the same time, with an eyeshadow that I already now disappears in the blink of an eye … so here goes:

WARNING: This post will contain pictures of me without makeup. 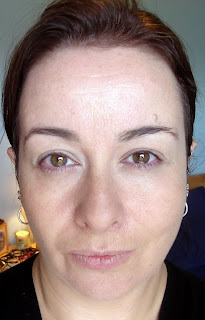 At this stage, what I mainly notice is that I’ve neglected to groom my eyebrows, no matter, won’t be making that mistake again! What I also notice is that the MAC Paint on my right eye (left on these pics) reflects the light a little more than the Urban Decay primer on the left eye (right in these pics), I think this is because there is a little hint of shimmer and pigment in the MAC, which the UD is missing.

At this stage, with both eyes open, there is little difference, but with my eyes closed, you can see that the UD primer is definitely better at grabbing the pigment, and the colour is truer. I’m using a loose shadow from Bare Essentials (Smoked Clay), which is a nice greenish grey, but that’s hard to pick up with your brush. However, there is a price to pay for this extra pigment being visible, as you’ll see in the next stage.

I thought that the shadow I was using was too wishy-washy in the first pics, so decided to go for another layer of colour. When applying this, I realise that the Urban Decay is damned difficult to blend over. In fact, it’s damn near impossible to blend over after it’s had a chance to set for a minute or two. This means that there is a visible line in my socket-crease on my left eye (on the right there), which I’m finding infuriating. Blending is important, vitally important, to any good make up, and the Urban Decay simply won’t let you do it.

Stage Four: In which my mascara is uneven.

Here, I’ve finished adding my eyeliner, and just wanted to see what the difference was between no mascara and one layer of Hypnose Drama (upper, pic) and with two layers of mascara (lower). What it has done is highlighted the fact that I have thicker lashes on my right eye, but longer lashes on my left. I’ll be sticking with one coat from now on, I think.

Stage five : in which the finishing touches are revealed 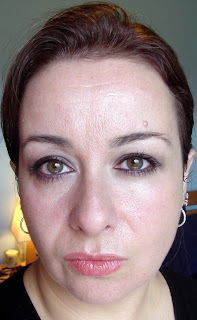 I got around to powdering, adding blush and putting on some lipstick (Ellis Faas in L307, a lovely glossy coral shade) but not fixing that damn eyebrow. That’s obviously why I’m looking so unhappy.

Stage six: In which your blogger fixes her hair, and her expression 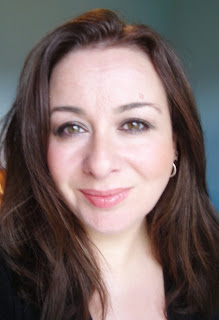 There we go, I’ve covered up my pointy spock-ears, and am feeling more human again.

At the moment, they’re fairly evenly matched. Whilst you do get a better coverage, and colour trueness with the Urban Decay, this is outweighed with the MAC Paint being easier to blend with. Now, I’m going to see how this look lasts throughout the day, and report back.