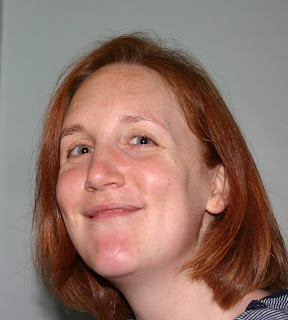 Some of you will have seen Seona on the blog before from when I did her wedding makeup.  Seona’s a good friend, and was one of the first to volunteer for another makeover when I had the idea for this series a couple of months ago.

After sitting down and discussing what Seona wanted from this session, it was hard to decide, Seona wanted both a lesson on how to do a smokey eye, but … wanted to use some “exotic” colours.  She’s been using a lot of browns and bronzes lately, and thinks she’s been stuck in a bit of a makeup rut.  In the end, we decided to do a bit of both.

Browns and bronzes really suit Seona, but we decided to use purple as an accent colour today, but first, we need to sort out the base: 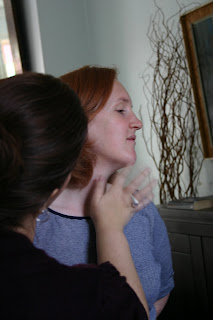 Seona doesn’t need much coverage at all, so we just smoothed in a light layer of Bobbi Brown Tinted Moisturising balm in Light, then followed that with a dusting of MAC Blot to remove shine.  Then, to even out the colour on Seona’s eyelids, we added a thin layer of my (recently depotted) Urban Decay Primer potion to her eyelids: 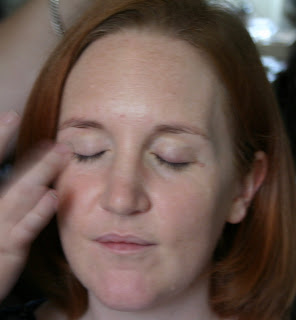 Then, we applied a colourwash of Trish McEvoy eyeshadow in Cashmere (a lovely pinky-purply brown shade) all over the lid: 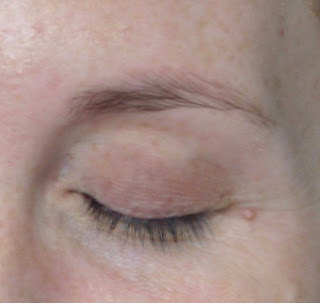 Then, to accentuate the crease, and add some definition, we added Trish McEvoy eyeshadow in Sugar Plum in a v-shape to the outer corners of her lids: 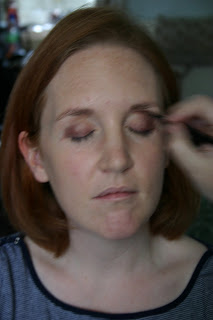 Once this was blended out, we added Trish McEvoy Definer shadow in Deep Amethyst as a liner to her upper lid: 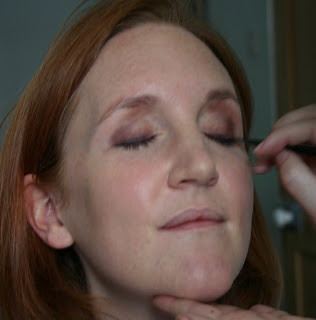 And went back to Cashmere for her lower: 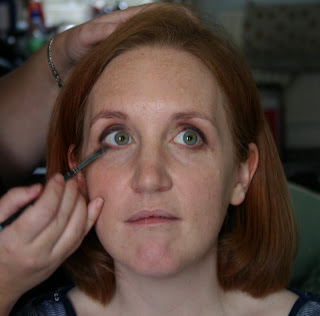 Again, we smudged that out, and added a layer of Max Factor Masterpiece Mascara, then added blush (MAC Blushbaby) and finished off the look with a slick of Bare Escentuals Buxom Lipgloss in Dolly: 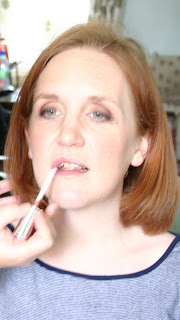 And here’s the finished look: 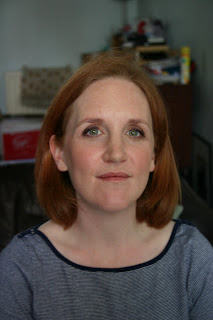 However, when we were finished, I didn’t think this was “exotic” enough – it was a lovely daytime smokey eye, but I realised we could take it to a nighttime look very easily by adding a brightly coloured eyeliner, so out came my trusty bottle of Urban Decay liquid liner in Ecstasy: 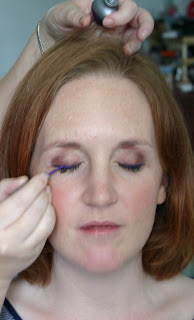 And presto, the day look became a night-time one!  Here’s the obligatory (and specifically requested by Seona) soft focus “glamour shot”: 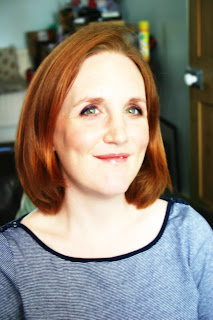 We had great fun, and I’d like to say a massive thank you to Sarah for acting as my photographer.

3 thoughts on “Makeover: Seona – The Return”