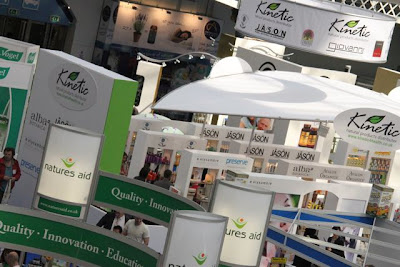 So, a couple of weeks ago, I was invited to attend the Natural & Organic Products Europe (NOPE) show at Olympia, as a guest of Balm Balm, who you’ve heard me talk about on several occasions before.

Dedicated to bringing together the brightest and the best of organic and natural products, NOPE is a trade show, which allows brands to showcase their wares to interested buyers and suppliers.  They first introduced a Beauty and Spa section in 2008, and that was the part of the show I was most interested in seeing!

Naturally, I made Balm Balm my first port of call, and having a chat with Glenda, Hayden and the rest of the family was certainly one of the high-points of my day.  I’m delighted that they’re expanding their range even further with a new facial collection including a super-light and delightfully refreshing coconut cleansing oil which I’ll be talking to you about in a bit more detail in a later post.

I then moved on and had a little chat with the lovely girls at Lily Lilo, who spent some time talking to me about a lot of the new products they have coming up later this year, including mascaras, pressed foundations (really interested in those!) and some balms. The brand has really expanded in the last few years, I’m happy to see, and I’ll be giving it a proper look-over in the months to come.

I popped over to Melvita who I’m sure you’re familiar with by now! I had a gorgeous hand massage, and a nice chat with their therapists, which was really lovely.  I have some products out with some lovely, lovely guest reviewers at the moment, and they’ll be giving me their feedback soon!

At this point, I thought I should have a look at the organic food side of things, however, I was distracted by this: 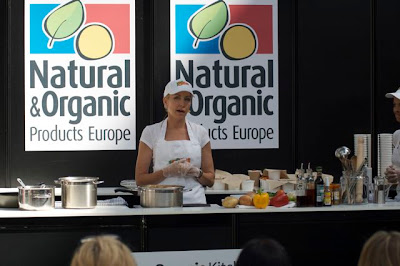 Yup, Heather Mills-McCartney (as was) doing a cookery demonstration.  I didn’t hang around long enough to figure out what she was cooking, whilst I was there she was chopping carrots very s l o w l y and lecturing people on categories of vegetarianism.  And Omega three, for some reason …

I then popped along and had a chat with Phillip Martin’s Organics who have a range of hair care, skin care and cosmetics.  Hailing from Italy (Phillip Martin sounds so Italian a name, dontcha think?), the products reminded me a great deal of John Masters ranges, and they look like they’ll be something super-interesting to look out for.

I went and found the Spieza stall and chatted to the girls again after meeting them recently at The Vitality Show, this time I actually got around to trying some of the products! I have to say that I think their rose and chamomile scrub is one of the most interesting products I saw on the whole day. Utilising chamomile stamens, it’s an great use of what would ordinarily be considered a by-product of organic cosmetic production!

I also had a chat with Sarah of Pai, I’ve been trying one of her moisturisers since we met, so look out for a review of that soon, and Sarah has also agreed to be featured on my “Lippie Chat” series, so we’ll be hearing more from her soon!

There’s plenty more, but this is running long, so I’ll bring you the rest next week …